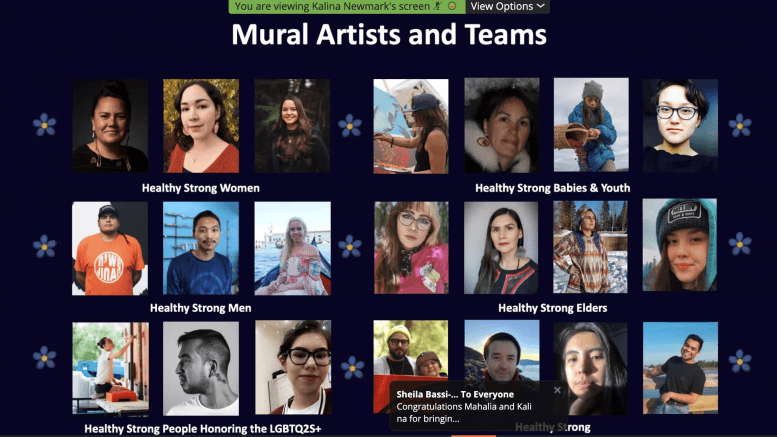 The designs for a series of murals planned for Yellowknife, Ndilǫ and Dettah were unveiled in a virtual event Thursday evening.

The murals were designed by 21 artists, 16 from the Northwest Territories.

Myrna Pokiak, an Inuvialuit artist, was one of them. She had the opportunity to participate alongside her 11-year-old daughter Mya Paul.

Pokiak and Paul’s mural theme was Healthy and Strong Youth and Babies. They worked on it alongside Elycia Monaghan and Carla Rae Taylor.

“I’m pretty excited to be a part of this project with my oldest daughter,” Pokiak said.

Pokiak described the mural as “ancestors looking over babies and youth nourished by Mother Earth with fruitful land and freshwater. Children get great game strength both mentally and physically through cultural connections and new opportunities while bringing forward a sense of joy and happiness to the world. Guided by the sun, moon and sky children grasp the sacred elements passed on through generations and our life’s lessons for the Dene laws.”

The public art project is being organized by Strong People, Strong Communities.

Kalina Newmark is one of the founders.

“One of the big things that I’m super proud of is that this is a grassroots effort. It’s all done by the labour of love,” she said. “I think the big thing for us as well is knowing the transformative power of art and how it really can create change.”

The project brought together new and experienced artists who were split into groups, to collaborate on a different theme.

The mural for Healthy Strong Women was designed by Lianne Charlie, Melanie Jewell and Kyla LeSage.

“Key moments for our group that stood out was having the opportunity to connect with community members as we were thinking through the themes,” Charlie said.

“For me, personally, it’s a really hard topic,” Thomas said. “What does it mean to be a strong man?”

There was also Strong LGTBQ2S+ Community and Other Indigenous Ways of Being designed by Kailey Sheppard, Brian Kowikchuk and Lexis McDonald.

“It’s a long title, but it’s very intentional,” she said. “One of the ways that we know that colonization has impacted our communities is our own understanding of gender, and sexuality. We know that not all people exist in binaries, there’s more than men, there’s more than women. And so we really want to understand and honor our own traditional ways of how we saw each other, our own traditional ways of viewing gender.”

Kowikchuk says the mural used rainbow colours to represent LGTBQ2S+ as well as a hashtag to symbolize the bridging of past and present.

“As a gay guy, that’s out — it’s a lot of work to do that. So it was a really great honor to be a part of this project, because any kind of motion of change in this area was something I really enjoyed being a part of,” he said.

The main unveiling of the finished murals will be taking place in August 2021.