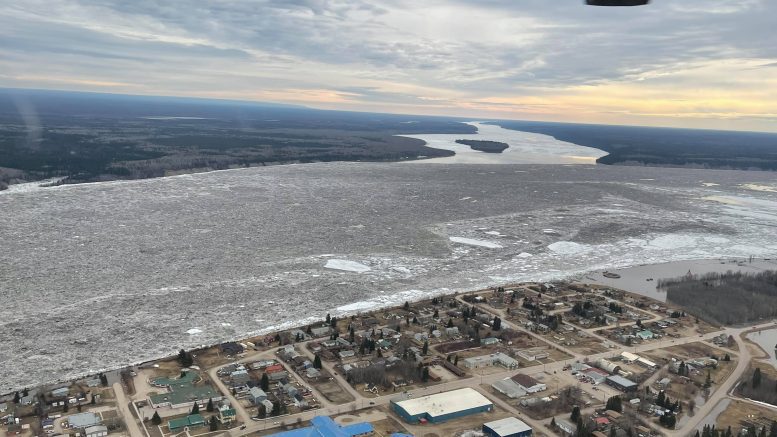 An aerial view of the flooding. (Photo courtesy of Hilda Gerlock.)

A mandatory evacuation order was issued for island residents in Fort Simpson on Sunday as water levels reached 15 metres.

Łı́ı́dlı̨́ı̨́ Kų́ę́ First Nation Chief Gerald Antoine says the young people in his community have never seen flooding like this.

“For the years after, they’ve been sharing their experience of that occasion and it has assisted in having our community develop an emergency plan,” he explains. “For this year we have a good emergency team, they’re on alert and they’re ready to respond to the announcement of a general evacuation and they know what to do and they know how to carry it out.”

Water level has reached 15 metres. Fire and RCMP will be canvassing the island to advise all…

Antoine is encouraging his community members to support and assist in a general evacuation.

The village of Fort Simpson declared a state of emergency on Saturday as a result of rising water levels.

Fort Simpson Mayor Sean Whelly says they are not be forcing anyone to leave, but are going door-to-door, informing residents of the situation.

“Now we call it a mandatory evacuation, we can’t literally force people out of their houses, but it would obviously be better for them,” he says. “It’d be much safer for people to be off the island.”

Whelly adds he can’t guarantee how long power will be on when the water reaches 15 metres.

He says the majority of residents will be set up on the higher mainland.

“We got family and friends stepping up all over the place to help families down here,” Whelly says. “It’s a hard thing to put all that burden on all the people up the hill, but there’s so many connections here that it’s working.” 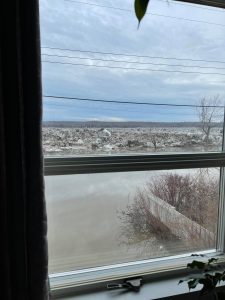 Hilda Gerlock shared a photo of the flooding outside her home. (Photo courtesy of Hilda Gerlock.)

Whelly and Antoine say an emergency campsite has been set up with water and community cooking.

“It’s all setup and ready and there’s already people who moved there yesterday,” Antoine says.

On Sunday planes arrived evacuating Elders and residents in need of assistance to Fort Smith.

Whelly says although the situation is currently stressful, it will be over soon.

“It’s not going to be forever, it’s something that should last a few days, we should as a community be able to pull through this,” Whelly says.

The community has been posting updates on Facebook informing residents of the state of emergency and evacuation procedures.

Antoine says a temporary medical centre has been set up at the Nogha Enterprises office.

Antoine and Whelly encourage all community members to have their essentials prepared.

Updates can be found on the Fort Simpson website and anyone in need of help with evacuation can contact the recreation centre at (867) 695-3300.