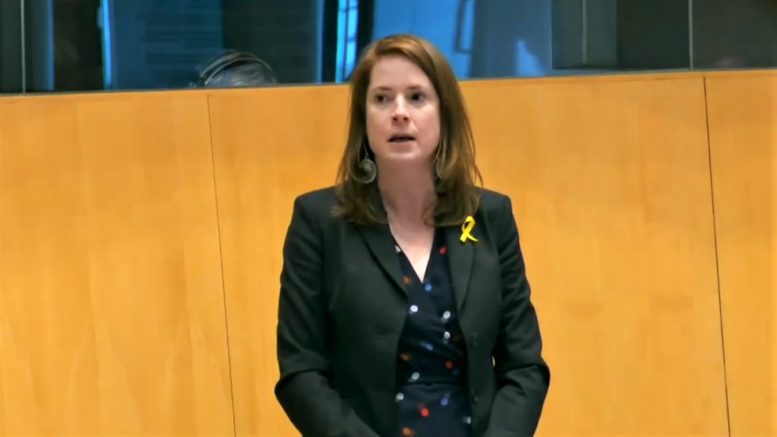 Julie Green, minister of Health and Social Services, apologized for her comments to Katrina Nokleby a day after saying the Great Slave MLA was “soliciting horror stories” on social media of people’s experience with the mental health system. Green also removed her point of order.

Below is CKLB’s original story.

Questions on mental health turned into a heated exchange between MLA Katrina Nokleby and Julie Green, minister of Health and Social Services, on Tuesday in the Legislative Assembly.

Nokleby asked Green whether she was going to acknowledge “the growing medical crisis we are facing when it comes to supporting our people who are struggling with mental health and addictions.”

Green disagreed on characterizing the current situation as a crisis.

“What we know from the Canadian Institute for Health Information is that there isn’t a significant change in the number of hospitalizations, so it is not correct to characterize it as a crisis,” said the minister. “We do know that mental health is a significant issue in this territory. We invest in it every year. We know that the issues are complex, that they are rooted in social determinants of health and, in some cases, specifically in our shameful legacy of colonization and residential schools.”

However, the latest data from the CIHI shows the number of discharges related to mental health and addictions in the NWT has gone up annually from 2015 to 2018. The data is based on “discharges”, referring to the patient’s record when in hospital.

Green then referred to a social media post by Nokleby asking for residents to send in their experiences with the mental health system.

I offer to all residents of the NWT, if you feel like you’re falling through the cracks in our mental health system,…

Green said by doing so, Nokleby was “soliciting horror stories” and “has been very gratified with that.”

“I think it’s disgusting that the minister would characterize my wanting to advocate for my constituents and residents of this territory as collecting horror stories that I find gratifying,” Nokleby responded. “And I find it disgusting that the minister does not accept that she is in the middle of a crisis and that the pandemic is only accelerating that crisis. If she is going to continue to deny the problem, we aren’t going to see any solutions, and we are only going to see things get worse.”

Following the exchange, both MLAs raised a point of order, each saying the other made allegations and was “impugning motives” to them that were not true.

The points of order are to be debated Wednesday at the Legislative Assembly.


'I left a vacuum and somebody else filled it. That's my biggest regret, not showing them more of myself before somebody else told them who I was,' says Nokleby.


Nokleby was stripped of her portfolios on Thursday afternoon.