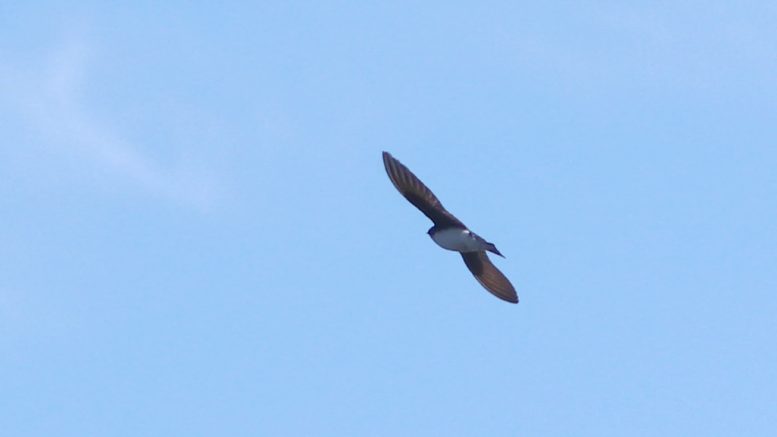 The department of Infrastructure was fined $10,000 after contractors destroyed the nests of a threatened bird species.

The fine stems from an incident where two contractors for the department were working on Highway 3 near Edzo — a nesting area for bank swallows.

Bank swallows tend to nest underground in material like sand.

Between May 30 and June 20, 2018, two employees contracted by the department of Infrastructure, were assigned to level the ground beside the highway to deter the birds from the nesting there. Instead, they destroyed the already established nests.

Bank swallows are recognized as a threatened species protected under the Migratory Birds Convention Act, something the statement of facts says the department was aware of.

The department also has rules in place to protect the birds, such as completing this work before nesting season begins in April.

The statement of facts says the reason the work was completed so late was because the ground was frozen in March.

The incident was discovered when a federal biologist doing field work came across the nests in May 2018.

When the biologist returned in June 2018, the nests had been destroyed.

Deputy minister of Infrastructure Steve Loutitt was at the Yellowknife courthouse on Thursday on behalf of the department. He was represented by counsel Roger Shepard.

The department had already pleaded guilty in December 2020. The crown and defence issued a joint submission for the sentence.

Morgan Fane, crown attorney, said the fault lies on the department, but credited them for acknowledging the mistake.

“The department did not exercise due diligence,” he told the courtroom, adding, “the government has shown remorse.”

Shephard outlined some of the new procedures in place as a result of the incident.

This includes publishing a 22-page work document with a section dedicated to bank swallows. There is also additional training planned for employees to undertake before next nesting season.

The training session is expected to cost the department around $8,000.

Loutitt also spoke at the court appearance stating “The GNWT recognizes not enough was done,” to protect the bank swallows.

“The department has taken steps and will be taking additional steps,” Loutitt told the courtroom, adding, “this was an unfortunate event.”

He said the incident was relatively small compared to many other violations of the Migratory Birds Convention Act by large organizations.

Justice Donovan Molloy says although he is not obligated to accept a joint submission, he found this one “entirely appropriate.”

“The rule of law applies to everyone, including our government,” he said.

He credited the department with taking responsibility and facing the consequences.

The department of Infrastructure has 60 days to pay the fine.