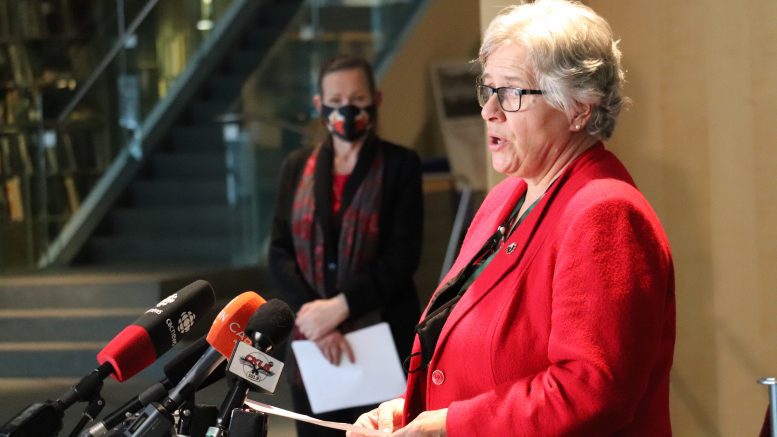 The NWT chief public health officer (CPHO) says the territory will be receiving thousands of doses of COVID-19 vaccines within the first few months of 2021.

The territory is expecting over 51,000 doses — enough to vaccinate 75 per cent of NWT residents aged 18 and older. Each person will need two doses of the vaccine, administered 28 days apart.

According to Dr. Kami Kandola, CPHO, around 70 per cent of the population needs to be vaccinated in order to achieve herd immunity. Although the territory is expecting to hit this number before the spring, territorial health minister, Julie Green, says this does not mean travel restrictions will loosen.

“The vaccine does not mean self-isolation requirements and travel restrictions will be lifted immediately,” Green says.

Dr. Kandola says there will still be a risk from other areas of the country that do not have as high a level of vaccination.

Work to be done

But first, the vaccine from American biotech company Moderna still needs to be approved by Health Canada. The federal government says it expects this to be completed before the new year.

The NWT does not expect to receive the already approved Pfizer-BioNTech COVID-19 vaccine anytime soon, as it does not have freezers capable of storing the doses at the required -70 degrees.

In a press conference Friday afternoon, Green outlined just how much work still has to be done.

“The vaccination plan will factor in the unique geography and population of the territory, along with recommendations from the National Advisory Committee on Immunization,” she says.

A big part of the planning will involve consulting with Indigenous and community governments to determine priority groups for the vaccine.

“Engagement is a critical part of respecting residents and developing a well rounded and collaborative approach,” she says.

Few details were given around who will be prioritized, but Dr. Kandola says those with health risks and workers who could potentially bring the virus into the NWT will be high on the list. However, she did not specify what types of workers this includes.

Green says the GNWT is in the process of procuring personal protective equipment, needles and swabs from the federal government.

Two storage freezers that will soon hold the vaccine are on their way to the Stanton Territorial Hospital in Yellowknife and the Inuvik Regional Hospital.

These specialized freezers are being sent by the federal government and have enough capacity to store the entire territory’s vaccine doses, Green says.

Despite Yellowknife and Inuvik storing the doses, Dr. Kandola says this does not mean those communities will be the first to receive the vaccine.

“We’ve been doing this for decades with the influenza vaccine, so this is not a new approach,” Dr. Kandola explains. “That’s the launching spot to go into the other communities. So it doesn’t necessarily mean just because the vaccines got shipped to Inuvik and Yellowknife that they will be the first ones to receive and distribute the vaccine in their own community.”

Brigadier-General Patrick Carpentier, commander of Joint Task Force North, is providing assistance in the planning of vaccine distribution. However few details on the distribution were provided.

Green says nurses will soon be receiving training on how to administer the vaccine and specialized teams are being established to vaccinate communities across the territory.

Premier Caroline Cochrane also addressed the media, praising residents for their efforts throughout the pandemic.

“COVID-19 put to test the resiliency of northerners in a way that we’ve never experienced before,” she says. “But the most important thing we all have to remember is it’s not over yet. We’ve come so far, and we can’t let our guard down.”

The GNWT is expected to release a detailed vaccination plan in the coming weeks.

‘I know it’ll be better for us in the future’: Dettah residents lineup for COVID-19 vaccine


Public health travelled to the community with 190 doses.