Everything in the North is tied to reconciliation.

Former MLA, Michael Miltenberger and lawyer Merrell-Ann Phare speak intimately on the subject of reconciliation in their new podcast, the Porcupine.

The pair says they’re trying to bridge the gap between Indigenous and non-Indigenous voices.

“But we’re scared, and a bit nervous to do it and don’t want to make it worse,” adds Phare.

It’s been over 150 years since Confederation and the pair admit they have a lot of ground to cover.

The topic of reconciliation is a controversial one, especially for Indigenous peoples. 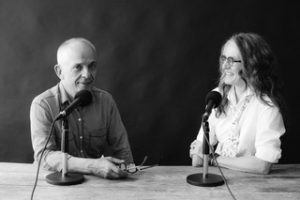 Michael Miltenberger and Merrell-Ann Phare believe it is “everybody’s responsibility” to contribute to the conversation.

“It’s also a part of me, I really feel that as a Canadian, I inherited a legacy. And it’s my choice, whether I’m going to do something about that,” says Phare.

This on-going conversation is “everybody’s responsibility.”

The joke “How do porcupines hug? ” embodies the level of caution and sensitivity that comes with this subject, says Phare.

“We’re not going to rebuild the Northwest Territories if we don’t talk about it,” they say.

Miltenberger, who is Métis, says the GNWT is “not doing enough.”

“I think we can do better than the status quo.”

Miltenberger remembers a time when his younger sister was abused by a dentist in his local community of Fort Smith. The dentist pulled out eight of her teeth that day, just for the sake of it, he says.

That experience is a vivid reminder, Miltenberger says of his “personal quest” to make sure we can all live and learn together as equals.

“We are all in this together,” says Phare “I believe that we can bring our jurisdictions, gifts, talents, laws and traditions, to the table and decide who’s going to do what.”

This relationship between settlers and Indigenous peoples has suffered for decades and “we work it out by talking and sitting together.”

The pair says they are currently working on season two of their Porcupine podcast and should have it released by spring 2021.

They also hope to tackle the issue of Missing and Murdered Indigenous Women and Girls sometime in the future.

The podcast is intended for every Canadian.

Miltenberger and Phare welcome residents to reach out to them with their stories, here.

In previous episodes, Tony Penikett, Manny Jules and Patti-Kay Hamilton have been featured.


NWT Bureau of Statistics says employment in the NWT rose by 200 workers causing unemployment to jump to 11.3 per cent.