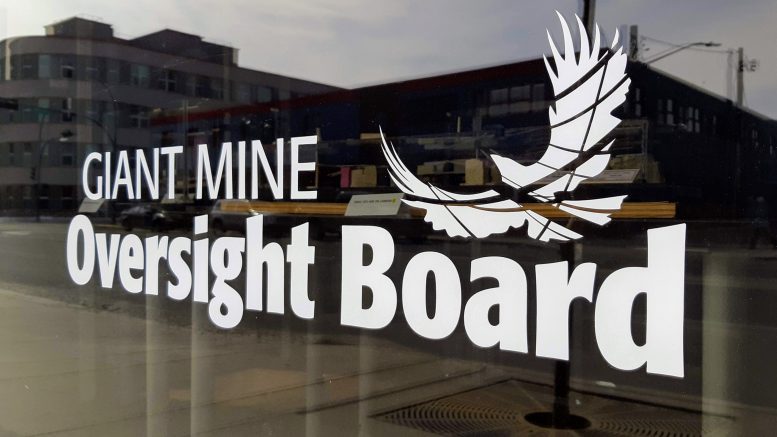 “(Giant Mine Oversight Board) is concerned that the project co-proponents have not fully embraced and integrated the concept of reconciliation within project operations and planning.”

That line appears in the first few pages of the latest annual report released by the Giant Mine Oversight Board.

“The project provides a really good opportunity for supporting the goals of reconciliation,” says Dr. Kathleen Racher, the chair of the oversight board. “Local Indigenous people haven’t benefited from this project at all over its entire lifespan but now is an opportunity that through education, training, employment and other social programs that they might be able to actually benefit.”

The Giant Mine remediation project team is led by Crown-Indigenous Relations and Northern Affairs Canada (CIRNAC), as well as the territorial government’s department of Environment and Natural Resources (ENR).

The project represents as significant employment opportunity for local businesses and people. However, GMOB’s report says CIRNAC and ENR isn’t taking advantage of this opportunity to hire locally.

“The Project Team spent $36,290,301 in 2017-18. This is a large investment of tax dollars,” it reads. “However, the Project’s annual report noted that employees and contractors on the Project were only 20 per cent Northern and 4 per cent Indigenous. This continues the downward trend of previous years.”

Dr. Racher said having performance goals would help put these numbers in context.

“What is a good number?” she asks. “That’s going to depend on how much work there is, what kind of work it is and what’s available here… We don’t what would be a reasonable goal because we haven’t seen any targets.”

Regardless of targets though, she says, “Just on the common sense basis, you think it should be higher.” She adds that the project team is making efforts in this regard but the results remain to be seen.

The report mentions two priorities for the upcoming years: moving ahead with the water licensing process and developing socio-economic plans. That second one is an important factor, says Dr. Racher, for residents to take advantage of the remediation project.

Overall, the report has 11 recommendations broadly split into three categories: project impacts on community opportunities and wellness, project management and planning, and environment and health.

One of those recommendations include responding to “reconciliation and legacy issues” with Yellowknives Dene, where GMOB says the progress between CIRNAC and YKDFN “remains slow” and “opportunities for reconciliation … slip by.”

Many other recommendations call for more public communication on the progress of the remediation itself, including the ongoing assessment of arsenic risks.

GMOB will be presenting its recommendations in a public meeting tomorrow, May 1, at 7 p.m. at the Northern United Place building.

Last week, Ecology North held a public workshop on knowing the risks of arsenic on growing and harvesting food around Yellowknife. The overall message was people can take precautions to ensure their food will be safe to consume; that means getting your soil tested if you want to grow and going at least 30 kilometres outside of town to harvest among other ideas.

For her part, Dr. Racher said the project team and other organizations involved like the City of Yellowknife, the North Slave Metis Alliance and YKDFN can hold similar events to ensure residents are kept up to date on the risks of arsenic.

In fact, the Health Effects Monitoring Program will be holding public meetings in mid-May to present the early findings of its study and to help participants understand their results.

About 2,000 people sent in urine and toenail samples for analysis by researchers at the University of Ottawa to establish a baseline arsenic exposure. The participants will be tested throughout the Giant mine remediation project to ensure arsenic exposure levels aren’t affected.

Giant Mine is a monster: YKDFN


YKDFN demands apology and compensation from Giant Mine, again.