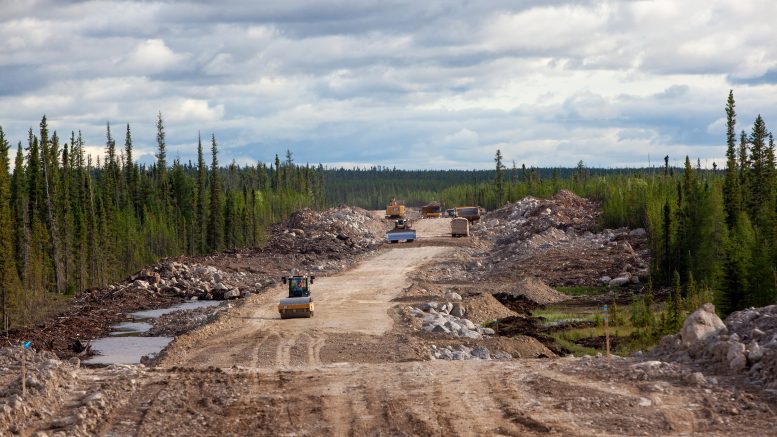 An update on the Tłı̨chǫ all-season road project. (Photo courtesy of the department of Infrastructure.)

Whatì Chief Alfonz Nitsiza says he was pleased to see how much the Tłı̨chǫ All-Season Road has progressed.

The project involves building a road from Highway 3 west of Yellowknife to connect with Whatì.

Despite disruptions from the COVID-19 pandemic, the Tłı̨chǫ All-Season Road may be completed ahead of schedule.

According to Ziaur Rahman, project manager, the operation is approximately 70 per cent complete and is expected to be open to the public by fall 2021.

“This is quiet a big milestone,” Rahman says.

Hiring in the community

At a press conference on Thursday, various members of the project spoke about the progress, COVID restrictions and hiring practices.

Nitsiza says the road construction has not only employed people in his community, but those across the Tłı̨chǫ region.

Greg Hanna, a spokesperson for the department of Infrastructure, says the project has exceeded the local hiring mandates.

According to numbers provided by the GNWT a total of 264 people are employed to work on the road, 155 are from outside the territory — approximately 58 per cent — and 109 are northerners or citizens of the Tłı̨chǫ region. The data provided did not specificy how many of the northern employees are Tłı̨chǫ citizens.

David R. Moore, an assistant deputy minister with the department of Infrastructure, says the project will have a lasting impact on the region as it provides citizens with training opportunities.

“Up to date, a significant percentage of labour has been northern and Tłı̨chǫ citizens,” he says.

However, Jackson Lafferty, MLA for Monfwi, says he has heard complaints from his constituents that they were not being provided many training opportunities.

He says, he brought these concerns to the site managers who told him they would be looking into it.

Lafferty adds, there should be more Tłı̨chǫ citizens working on the project.

“Well obviously you’d like to see the number even higher,” he says of the employment statistics.

However, Lafferty says he has been to the construction site several times and has heard from site management that they’re doing everything in their power to hire and recruit people from the community.

He adds he has heard recently more Tłı̨chǫ residents are being placed in supervisor roles, but says he will continue to advocate.

“It’s just one of those areas that we need to continue to monitor,” he says.

Despite a six week delay as a result of COVID, the construction is actually slightly ahead of schedule.

Rahman says the delay didn’t affect the construction because the March COVID-19 lockdown occurred during the winter work shutdown.

“Basically we did hit pause, kind of [for] six weeks due to COVID-19, and that was at the same time as our winter down period,” he explains.

When asked whether the construction sites have been enforcing COVID-19 precautions, both Moore and Rahman said there are strict guidelines in place.

Hanna also provided an email after the press conference outlining COVID precautions at the worksite which includes feedback from the NWT’s chief public health officer and the Workers Safety Compensation Commission.

Nitsiza says his community is preparing for what will come when the road is complete.

This includes benefits to the community including an influx of visitors who can be expected post-COVID.

“Once things are back to normal, we’ll try to attract tourists,” he says.

He adds the road will connect Whatì to Yellowknife, meaning more access to things like shopping. But will also lead to easier access for alcohol and could result in bootlegging.

However, Nitsiza says the road will be very beneficial to both residents of Whatì and Tłı̨chǫ citizens, and his community is preparing for any issues which may arise.

“We are trying to be ready,” he says.


Russell Neudorf, associate deputy minister, says it will cost $2.6 million more on top of the GNWT's current pandemic response to establish the secretariat.