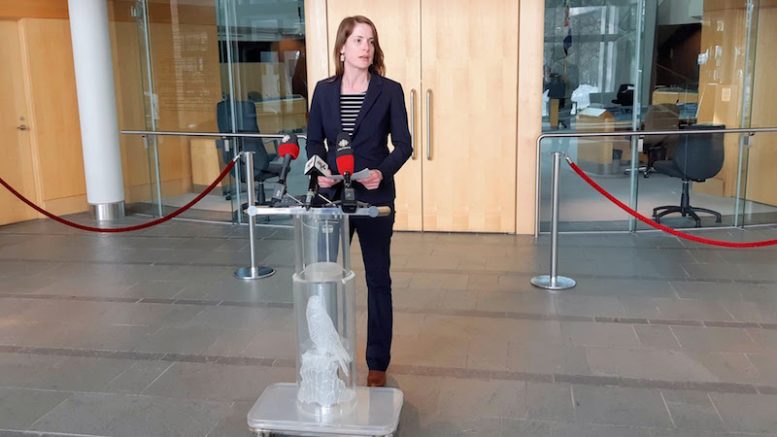 A photo of Katrina Nokleby from March while she was still minister. (Francis Tessier-Burns/CKLB).

Yesterday, CKLB published a Q&A with ousted minister Katrina Nokleby. Following an emotional end to the first interview, she agreed to return for a follow up.

Prior to beginning, she told CKLB that she would not speak about details regarding threats she’d received, which is where the first conversation left off.

She wrung her hands as she sat at the microphone for our second conversation.

What happened yesterday where you felt like you had to end things?

I’m trying to be more careful with my words, and yesterday was a hard day. But I realized your questions were bringing up some emotions in me and that I wasn’t sure I was going to be able to express myself properly without being overtaken by those emotions. I did have the thought of ending it just yesterday but we talked a lot about what had happened and not about where I’m trying to go. I realized that leaves an interview kind of unfinished. I’m trying to figure out how to move forward in a productive manner, working with my colleagues in getting past this. But I don’t think just pretending it’s done and not dealing with it either is going to resolve it.

We recently got the news that Dr. Joe Dragon has officially gone from the department of Infrastructure. There’s been a lot of speculation about what your relationship was with him. What happened there?

Even if you’re both now gone?

The business community has said the government’s response to the pandemic was slow and has forced businesses to go into additional debt. You were leading that, what’s your response?

The message I received at the beginning of COVID was that our priority was the health and safety of the people of this territory, which I 100 per cent agreed with, and to step back on economics. I don’t make decisions by myself. It is a cabinet-level decision, I ran everything by my colleagues. I felt that I was doing everything I could to advocate for the business community and many times I did feel like my concerns were falling on deaf ears.

A cabinet spokesperson told CKLB, “The GNWT is committed to supporting the business community during these challenging and unprecedented times. As we are about to begin the Fall session of the Legislative Assembly, this government is focused on moving ahead for residents of the Northwest Territories. As stated before, matters discussed at cabinet are subject to confidentiality to ensure that Ministers can discuss all matters freely and frankly. Cabinet meetings are an opportunity for the fulsome and frank exchange of views. That is in part why cabinet confidentiality is so important. It ensures ministers are able to voice their perspectives.”

Something else that you faced criticism for was the Rae Access Road project.

Yes. I can’t speak to the details of that. However, I had erroneous briefing notes during some of my meetings. I also had my directions not followed and was not given the right information.

After the interview, CKLB followed up to ask what that erroneous information was but Nokleby declined to give more details.

Asked if cabinet had been made aware about the erroneous information Nokelby says she received, a spokesperson said, “All ministers are expected to work with their departments to ensure they are being properly briefed on all aspects of their portfolios, and to be accountable for the work their departments do.”

Did you feel supported by your departments?

No, I shouldn’t say that. I felt a lot of support from my departments; individuals within my departments, I felt I had great rapport with. But let’s put it this way, do I feel that when I gave direction to one of my departments to do something, that was executed? No. Never.

What if what you were directing was not necessarily the right thing?

We had those conversations. When things were presented to me that showed me that my opinion was not correct, I changed it. That’s a very engineering trait; when you’re presented with new facts and data, you update your opinion, your project, your design. So I think I was very open to listening to the advice from within the department. However, there were key areas in which I made certain directions that I wanted to see happen, and they were not executed.

Again, following the interview, Nokleby declined to give additional details.

The people I spoke to in the business community said they had a positive relationship with you. How do you have such good relations there, and seemingly negative ones with your government colleagues?

Because I do not respond to bullying. I do not pander to people’s egos…

(She interjects) I could have done a lot of things differently, Francis. I’m not sitting here ever saying that I did everything right and it’s everybody else’s fault. Do I wish that I had been the type of person to say to a rude email, ‘Thanks very much. Have a great day’? Yes, because it would have made my life a lot easier. But I’m not. And I was raised that if you see something that is wrong, or somebody is acting poorly, you don’t reward that and you speak up. I want to make changes in this government and this government sorely needs it. I think what’s happened here actually just exemplifies that.

There’s a new session coming up, will it be hard working with colleagues?

I’d be disingenuous if I said I’m coming back and everything is fine. Yeah, it is going to be difficult. But there are members in the House that I am building relationships with, that I’ve always felt I had good relationships with. So those are the ones that I’m going to focus on. There are others that I will always likely butt heads with and that’s an ideology thing. I am there to represent my constituents. I’m not there to hold hands with the rest of the regular MLAs, but I am going to work with them. I’m not that kind of person to sit there and become a roadblock, that flies in the face of what my intent was to run, which was to create effective change. But again, if they’re going to be rude, I had to sit there and take it as a minister, I don’t have to sit there and take it anymore. I will continue to call people out; I think more people need to be called out on their bad behavior to be honest.

How do you not get caught up in doing that and focus on the change you want to make?

I’m just coming back into this now, trying to figure out and navigate that path forward. I’m not going to sit here and say I have this clear idea mapped out. Do I want to spend the next three years just being the devil’s advocate and antagonizing everybody? No, that’s not who I am. Despite how I have been portrayed and painted, a lot of the regular MLAs don’t even know me. The way I move forward now is I show them who I am. I show them my good intent. I show them my want to work hard for the people. I’m not a difficult person.

But you have portrayed yourself as this person who wants to come in and shake things up, call people out. That can mean being difficult.

Right… Women are always going to be classified as difficult when they want to make change. But I balk at the term ‘shake things up’ because that is like, I’m going to try not to swear here, being an ‘S’ disturber. I look at it like I’m going to come in and I’m going to speak the truth as I know it. If I’m presented with new facts, and that truth changes, then I will admit that.

So coming in to be like, ‘I’m going to shake it all up, and I want to create this chaos’… Yes, you have to create a bit of chaos to make change, however, putting it that way makes it seem like that’s my intent and my goal, but my goal is the betterment of the territory.

I thought I could come in as a minister, and say these are the changes I want to see, and that would be executed. When I realized that was not happening, it became a very frustrating situation to be in.

Being on this side (of the House), and having a lot more time for self-care, I am going to be a lot more effective and a lot clearer in my mind. You get to a point of exhaustion where it’s hard to keep functioning. By August, I was exhausted, I will admit that. Do I think that it made me a bad minister? No. And I still stand behind the fact that I don’t think I’m the worst minister in that cabinet. I know, that’s a terrible thing to say. It doesn’t make me sound like a nice person, but when I’m being called out on my performance, and I looked around me, it was hard to take that.

I just have to really figure out for myself how to go forward, but I can promise you, and I can promise the people, that my intent is not to come in and go for vengeance. I don’t want that to be the legacy that I leave after the 19th Assembly.

Do you have a priority now going into the new session?

Looking back on how this played out and looking ahead, do you feel like you owe anyone an apology?

There’s definitely some people I still need to go and talk to. I think a lot of this year’s issues have been exacerbated by the communications being on the phone, by corresponding through emails all the time. I truly think, had this not been a crisis where we had to all be separate, things would not have escalated to this point.  I left a vacuum and somebody else filled it. That’s my biggest regret, not showing them more of myself before somebody else told them who I was. I’m going to keep speaking when things don’t look right and keep asking hard questions. I’m never going to be a typical politician. That might just make for an interesting three years ahead.

The next session of the Legislative Assembly begins today.

This interview has been edited for brevity and clarity.

This story was updated at 10:50 a.m. to reflect responses from cabinet communications.