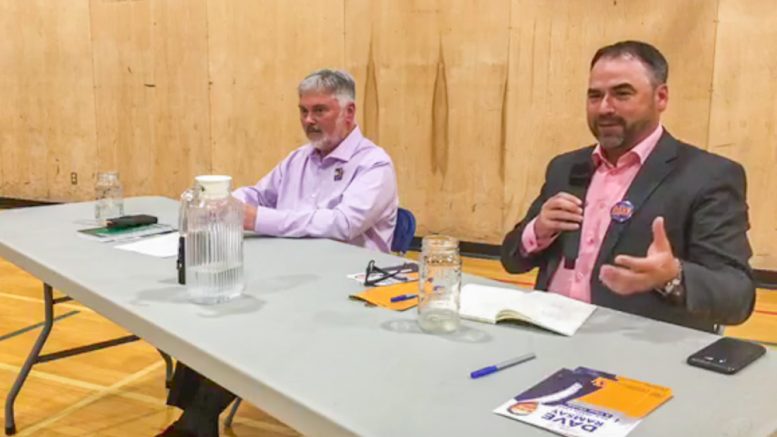 Few people embody the tension and different possibilities for the territory’s future like the two MLA candidates running in the riding of Frame Lake.

Incumbent Kevin O’Reilly has spent his time as an MLA skeptical of multi-million dollar infrastructure projects geared towards attracting the extractive industry.

His counterpart Dave Ramsay spent his time as an MLA in cabinet pushing to open the territory to more of those companies. Now, he even sits on the board of Fortune Minerals.

The contrast between the two candidates was on display yesterday evening during a debate at William Macdonald School.

O’Reilly says he doesn’t oppose either project but that the evidence isn’t yet there for him to support them. He’d prefer seeing the Government of the Northwest Territories (GNWT) diversify the economy by investing in tourism, the arts, and home construction to serve residents.

The exorbitant cost of these projects is another problem for O’Reilly, as the government is nearing the debt ceiling. After this year’s budget, the territory’s debt is at $1.1 billion, the current maximum is $1.3 billion.

As was highlighted in the NWT chapter of the federal government’s recently released Arctic and Northern Policy Framework, the territory’s gross domestic product has shrunk by 13 per cent between 2007 and 2017. It’s also the only territory with negative economic forecasting; much of that is due to the expected decline in diamond mining.

With that being the case, both Ramsay and O’Reilly agreed that something needed to be done to kickstart the NWT economy.

The pair did agree on some other measures of economic diversification, such as reinvigorating the Great Slave Lake fishing industry.

The candidates were asked about the possibility of a mental health and/or addictions recovery facility in the territory.

Ramsay said he’d like to see one open here in the territory, while O’Reilly said the territory should focus on investing in better aftercare programs for when a person returns to the territory after treatment.

Ramsay pointed to downtown Yellowknife saying, “Whatever we’re doing now isn’t working.” He said he doesn’t “buy” the idea that an addictions recovery centre wouldn’t be sustainable in the territory, but didn’t offer any ideas on how to fund it.

Both were supportive of more on-the-land programs to help people address mental health and addictions struggles.

The candidates were also asked about the involvement of Indigenous governments and groups in infrastructure projects. One such project is the remediation of Giant mine.

Both were frustrated with the federal government’s contract system that doesn’t guarantee economic benefits from the project for northerners.

Ramsay said the government needs to build up trust with Indigenous people to make sure they receive benefits.

O’Reilly said the best way to do that would be to complete the Dehcho and Akaitcho land claims process.

Specifically for Giant mine, Ramsay said the GNWT needs to take a more active role in the project.

O’Reilly said Yellowknives Dene should be at the forefront of those benefiting from the project. Residents would also gain transferable skills to other remediation and clean up work around the territory.

Another issue where the candidates had different opinions was on the idea of universal basic income.

Briefly: UBI is a program where all residents would get unconditional payments to help with the cost of living.

O’Reilly cited successful pilot projects in Ontario and Finland and said he’d be open to trying a pilot project in the territory.

Ramsay, on the other hand, was wholeheartedly against the idea of “giving everyone $50,000,” which is not at all what a universal basic income would do. He said this would be a disincentive for people to find a job.

For example, single participants in the Ontario pilot project, would have gotten a maximum of $16,989 a year with 50 cents knocked off for every dollar of earned income. UBI programs do not replace work.

O’Reilly said some funds going to current income assistance programs could be used to fund the pilot project.

One area where both candidates agreed to help families would be to bring in universal childcare.

O’Reilly cited a report from the end of the 17th Legislative Assembly that said the program would cost between $20-25 million. He added that the GNWT would need to check its priorities to ensure programs like these would be at the top of the list.

The two agreed on other issues as well: keeping benefits for seniors, getting more land so the City of Yellowknife can expand, and re-evaluating the GNWT’s Business Incentive Policy, but when it comes to long-term economic stability, voters are going to have to decide between pushing for mines or looking to grow the economy elsewhere.

You can watch the debate below.

Have your say on the rules for being an MLA