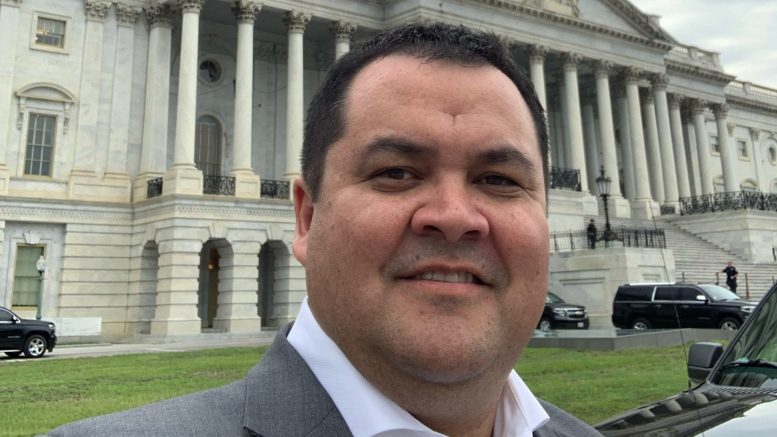 The Grand Chief of the Gwich'in Tribal Council, has reclaimed his traditional Gwich’in last name of Kyikavichik. Formerly known as Ken Smith, Kyikavichik made the change official in early march. (CKLB file photo.)

“Without the Porcupine caribou herd, you take out who we are as a people,” says Ken Smith, grand chief of the Gwich’in Tribal Council.

“That is a future we cannot comprehend,” he adds.

Smith says he is concerned for the protection of the Porcupine caribou after the Trump administration opened up plans to create a competitive oil and gas program in the Arctic.

This new gas program will allow for leasing, production, development, and transportation of oil and gas in and from the Coastal Plain.

“This is sacred land,” says Smith.

According to the Gwich’in Steering Committee website, the effects of drilling, mining, pipelines, and other industrial disruptions could negatively impact the natural migration patterns of the caribou. 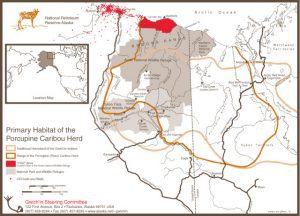 “This is a non-negotiable issue for us, and we will continue to stand against it and fight with our allies,” says Smith.

The biological heart of the refuge remains vulnerable to industrial development, as stated on the Gwich’in Steering Committee website.

“We will do everything in our power both legally and financially to protect the Porcupine caribou herd and the sacred camping ground,” says Smith.

The Arctic National Wildlife Refuge (ANWR) was created in 1980, by the Alaska National Interest Lands Conservation Act for the purpose of protecting all wildlife, plants, water, gathering activities and international treaty obligations.

According to the Gwich’in Steering Committee, 9,000 Gwich’in people make their home on or near the migratory route of the Porcupine Caribou herd – consisting of more than 169,000 animals.

The territorial government recognizes its “responsibility” to stand with the Gwich’in and Inuvialuit for the conservation of the Porcupine caribou.

The Government of the Northwest Territories says it believes that the Final Environmental Impact Statement and Record of Decision released by the Bureau of Land Management on Aug. 17.  “did not adequately address their concerns.”

The Bureau of Land Management is responsible for designating public lands for commercial, recreational, and conservation efforts.

The report reads, “the potential impacts described in the Leasing EIS are necessarily uncertain and likely overstated.”

“The Record of Decision validates our experience of the erosion of integrity in assessments, process and respect: our Traditional Knowledge disrespected, our requests for consultation ignored, and our concerns disregarded, says Dana Tizya-Tramm​, chief of Vuntut Gwitchin First Nation from the Canadian Porcupine Caribou Management Agreement.

“Opening ANWR to oil and gas development is a decision that requires careful consideration to reduce potential impacts on this shared herd,” says Shane Thompson, minister of Environment and Natural Resources.

The GNWT says it will be communicating their “disappointment” and “the lack of consultation and consideration of impacts to Canadian Indigenous users” to the U.S. Department of the Interior.

Royal Bank Canada joins the cause

The Royal Bank of Canada (RBC) is the first bank in Canada to stand against financial developments in the Arctic Circle.

RBC has created a policy to reject, “direct financing for any project or transaction that involves exploration or development in the Arctic National Wildlife Refuge in Alaska,” as stated in a press release.

RBC acknowledges the “vulnerability” in the ANWR, joining over a dozen global institutions rejecting drilling initiatives.

Smith encourages other institutions to recognize the importance of  “this land for our people, the animals, and our world.”

Smith says that he is “confident” that if Democratic party nominee, Joe Biden is successful that he will protect the efforts in Alaska.

Biden has been vocal on his position to protect the Arctic Circle, but if Trump is successful in auctioning leases by the end of the year that may make it more difficult for the opposing party to reverse his decision.

Smith says it is too early in the process to begin arranging concrete plans, although he is prepared to fight by any means necessary when the moment is right.


Kenny Smith and Kristine McLeod are the newly elected leaders.