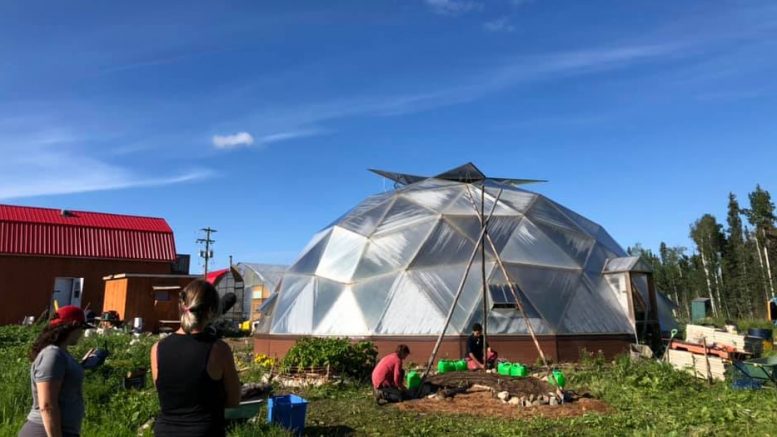 The Northern Farm Training Institute is organizing a program in partnership with the Tłı̨chǫ Government. The program will teach participants farming and life skills. (Photo courtesy of the NFTI.)

A new paid program will offer Tłı̨chǫ residents the opportunity to improve life skills while learning how to farm.

This 12 week paid internship is being run out of Hay River’s Northern Farm Training Institute (NFTI), in partnership with the Tłı̨chǫ Government.

Leona Lafferty, career development manager for the Tłı̨chǫ Government, says the program will give participants more than just work experience.

“There will also be wellness programs included,” she says, “to build their personal skills and you know having them in a drug-free environment.”

Lafferty says the participants will bring these skills back with them to their home communities.

“I really felt that this was something we needed in our region,” she says, “I’m pretty excited about it.”

The Building Regenerative Individuals through Development, Growth and Empowerment (BRIDGE) program, is a philosophy followed by Jackie Milne, NFTI president.

“We’ve begun to look at biological systems, like the planet, as if it’s a machine,” she explains, “and this is an erroneous way of looking at a living system.”

“The weakness in our society is we really have lost — in my opinion — the appreciation and the importance of healthy, happy humans,” she says, “we always put ourselves last.”

Milne says her farming practices reflect this philosophy and she is ensuring it extends to workers as well.

The participants will contribute six hours of farm work a day, including milking animals, shepherding and general labour.

But two hours will be set aside each day for participants to focus on developing life skills.

Milne says examples include giving someone two hours of studying for school, time to work towards obtaining a drivers license, or the opportunity to learn an instrument.

“We want to add in to the workday an extra two hours of support training, in a very broad kind of category, so we can be adaptive to the people who may come and want to join us,” she says.

There will be no drugs and alcohol allowed on the farm premises, in its absence there will be yoga classes, music lessons, sewing and board games aplenty, Milne says.

The BRIDGE program will start in October, two spots have already been filled, but there is one remaining position for an interested Tłı̨chǫ citizen.

Both Milne and Lafferty said there are discussions of expanding the program in the future by inviting a larger group of participants for the next session.

Voters head to the polls for Tłı̨chǫ community government elections