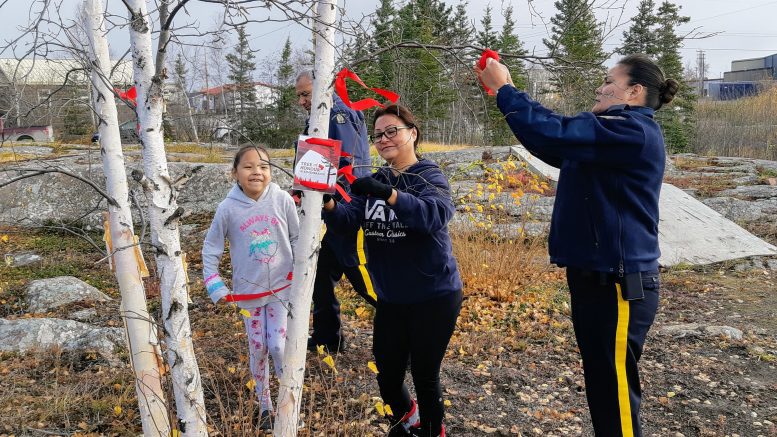 Two dozen people gathered near the cemetery in Behchokǫ̀ yesterday to honour missing and murdered Indigenous women and girls.

Yesterday’s gathering was the first of six upcoming Tree of Honour ceremonies across the territory hosted by the Status of Women Council of the NWT.

“This is not a way of life that women should have,” says Violet Camsell-Blondin, the council’s president.

The event incorporated prayers by Elders and a fire feeding ceremony.

Camsell-Blondin says it’s important to honour the women in a way that also honours their culture.

Camsell-Blondin said it wasn’t intentional to hold the events the same week as Orange Shirt Day, commemorating students and survivors of residential schools. However, she drew a link between the schools and the violence that many Indigenous communities face today, saying the experience “changed the life cycles of generations”.

Now, she says “we’re trying to readjust and go back to our old cultural ways and Dene laws to put an end to the trauma, put an end to violence.”

Several members of the RCMP attended the ceremony and passed out ribbons to community members to tie to a tree in the cemetery.

Camsell-Blondin said she appreciated the officers showing up and being part of the ceremony.

The Tree of Honour gatherings come a week after hearings in Regina to certify a class action lawsuit filed against the RCMP relating to its treatment of cases involving missing and murdered Indigenous women and girls.

Jane Weyallon, the president of the Native Women’s Association of the NWT, spoke about the National Inquiry into Missing and Murdered Indigenous Women and Girls.

She said it was “an opportunity to change the way that Canadians see and think about Indigenous women, girls and two-spirit persons”.

Commissioners released the results of the inquiry more than a year ago, and many are criticizing government’s lack of implementation of its 231 Calls for Justice.

Weyallon said it was crucial organizations like hers and the council work together to continue bringing attention to the violence and systemic dangers Indigenous women face.

But they can’t do it alone.

“It doesn’t go away, we have to deal with it,” she says. “And we have to get all the people involved, the leaders, territorial to Indigenous governments and we do need their help because most of those organizations are run by men.”

Weyallon was disappointed that no male community leaders were part of the ceremony. 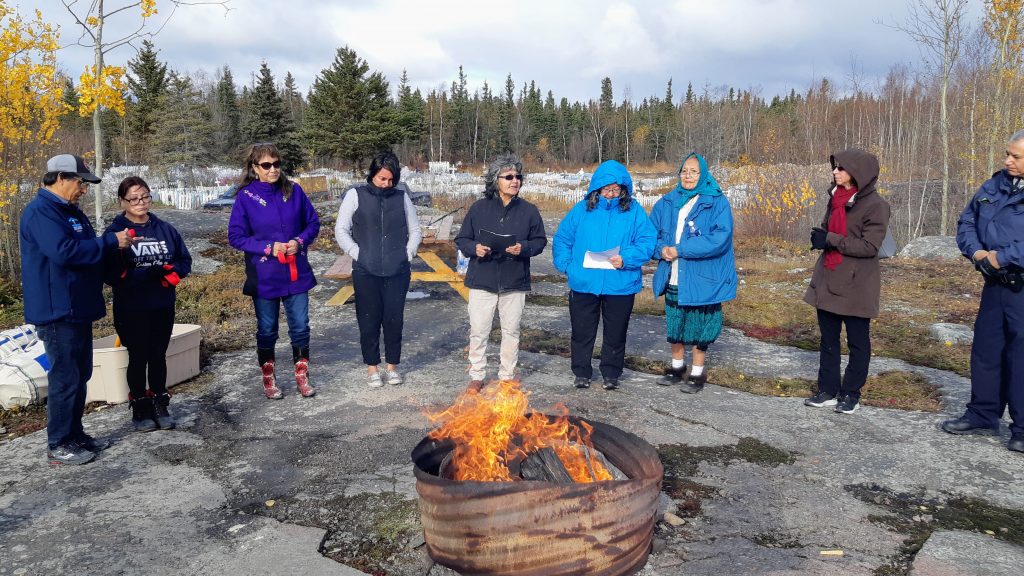 Both the territorial and federal governments say they are working on action plans to address the calls for justice that came from the national inquiry. Weyallon says she hopes her organization will be included in the creation of those plans.

“Enough is enough,” she says. “All the girls, all the women, the mothers, the grandmothers, they all matter.”

Aklavik held its ceremony on Tuesday evening; the next ones will be in Yellowknife on Thursday, in Fort Simpson on Oct. 3, and Hay River on Oct. 10.