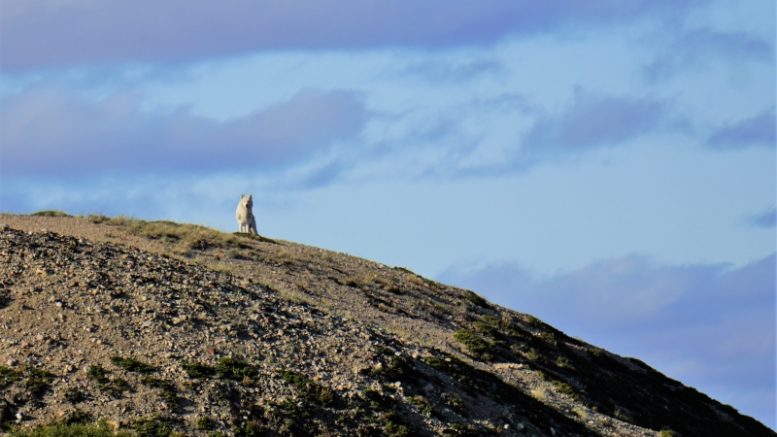 Tłı̨chǫ monitors reported seeing a record number of wolves in the 2019 season. (Photo courtesy of the Ekwǫ̀ Nàxoède K’è program)

Tłı̨chǫ and territorial government officials attribute the low wolf harvest numbers to difficulty accessing the animals over the past winter.

With those low numbers, the department of Environment and Natural Resources hired a helicopter and marksman this spring to shoot wolves from the air to try and meet reduction goals.

Now the Wekʼèezhìi Renewable Resources Board (WRRB) has to decide whether it will continue to allow these practices to manage the wolf population.

Aerial removal is part of a proposed joint management plan from ENR and the Tłı̨chǫ Government. The program’s goal is to remove 60 to 80 per cent of the wolves on the Bluenose-East and Bathurst caribou winter ranges annually.

If local hunters can’t reach that amount by the end of March, then ENR hires a helicopter and shooter.

Overall, 85 wolves were removed as part of the pilot program — 54 within the Bluenose-East range (45 per cent) and 31 for Bathurst (63 per cent). According to the program’s technical report, just under half (41 wolves) were culled from the air.

ENR and the Tłı̨chǫ Government recently submitted an updated wolf management proposal based on lessons learned in the pilot program.

John Nishi is a biologist and technical advisor for the Tłı̨chǫ Government.

He said the updated plan is largely the same as the pilot program, but with a few changes to better collect information from hunters and aerial crews.

That information, he says, will help better train harvesters and give a more accurate sense of how many wolves are actually with the Bluenose-East and Bathurst winter ranges.

Again according to the technical report, “the GNWT does not have reliable estimates of wolf abundance across the NWT, or for populations of wolves associated with specific barren-ground caribou herds.”

Right now that best guess is only about 49 wolves within the Bathurst winter range and 121 within the Bluenose-East range. That means between 29 and 39, and 73 to 97 wolves should be removed every year, respectively — much lower than the initial proposal of 300 wolves.

To make that happen, ENR and the Tłı̨chǫ Government are planning to hold more training sessions for new and experienced harvesters alike.

“That is the core of our program, we wanted to build this around our harvesters and the traditional economy and that is part of the lessons learned that we’re trying to start out for this winter is how do we encourage them,” said Brett Elkin, ENR’s assistant deputy minister of operations.

CKLB asked whether it would be more cost effective to increase financial incentives or fund hunting trips up front for ground harvesters instead of hiring a helicopter and marksman.

CKLB asked the department for the exact amount it paid for aerial removal.

Instead, Joslyn Oosenbrug, ENR spokesperson, said, “Funding for the wolf management pilot program covered a range of different activities, but a significant portion of this year’s cost supported the aerial collaring, surveillance and removal costs. The budget for this work was approximately $500,000, and we expect our final costs to be within this range.”

According to Elkin, the financial incentives for ground harvesters are high enough; the difficulty comes from accessing the wolves.

Robert Mulders is a biologist with ENR.

“These are fairly large winter ranges and so I think the difficulty in covering a large area and that’s where the helicopter does give you another option to go in without competing with ground harvesting,” he says. “You can get into some of these more remote areas and remove packs in deeper snow, it’s a nice complement to the ground-based efforts.” 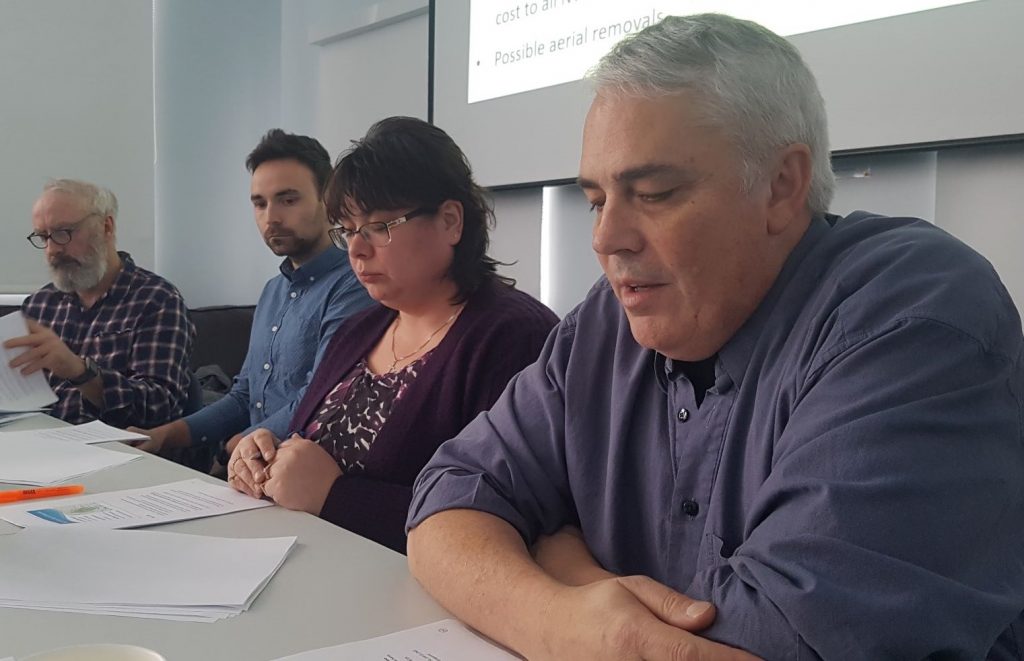 Tammy Steinwand-Deschambeault, the Tłı̨chǫ Government director of culture and lands protection, said some families do not support wolf harvesting.

“It goes back to the belief that the wolf needs to really be well-respected and harvested in a good way,” she says. Otherwise it can lead to bad luck for the harvester and his family.

For this reason, she says the Tłı̨chǫ Government will contact any families whose members sign up for upcoming training, to confirm they can attend and have their families consent.

Steinwand-Deschambeault says wolf’s blood must be handled especially carefully so it doesn’t get on any equipment. This is also why wolves that are shot from the air are not brought into communities.

The carcasses are brought back to a lab for samples and stomach content analysis, while the furs go to the auction market.

Based on the latest population surveys from 2018, the population estimates for the Bluenose-East and Bathurst herd are at 19,300 and 8,200 animals, respectively.

ENR and the Tłı̨chǫ Government sent a population model with varying levels of wolf removal as part of its submission to the WRRB.

“With the most aggressive wolf control (reduce 80 per cent in 2020 and 3 years maintained at 20 per cent) and assuming current wolf population estimates are accurate, potential population sizes in 2024 could be 11,323 and 7,012,” reads the report. “Thus, the wolf control would essentially stabilize the herds after 4 years of wolf removal.”

But as mentioned above, 80 per cent removal was not achieved this year.

The next population surveys for both herds are scheduled for June 2021.

Jody Pellissey, executive director of the WRRB, said the board expects to make a decision on the proposed wolf management plan in January.

If approved, the plan will guide wolf management in the North Slave until 2024.