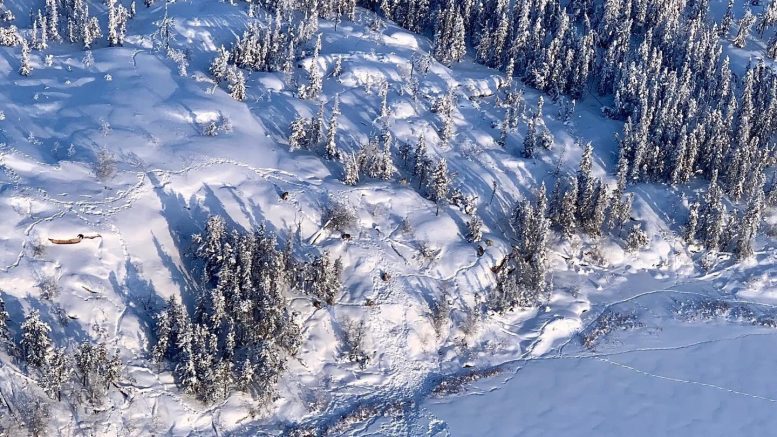 The Department of Environment and Natural Resources has started culling wolves from helicopters.

Department officials say the killing is to protect the declining Bluenose-East and Bathurst caribou herds.

According to Joslyn Oosenburg, ENR communications officer, the aerial cull started on April 22.

“We would have preferred to begin sooner, but unfortunately, we have faced several delays in carrying out this work, primarily due to poor weather,” she told CKLB in an email. “We are still hopeful to be able to complete the required work by the end of April.” Both herds migrate to their calving grounds in Nunavut in May and June.

According to OpenNWT, Great Slave Helicopters was awarded the contract on April 3 for $91,000 to carry out the aerial cull. The tender was posted on March 30 at 5:15 p.m and closed on April 2 at 3:30 p.m., giving companies just over 48 hours to bid.

Asked who was doing the shooting, Oosenbrug said the department “hired a helicopter company and a specialized shooter to conduct the aerial removals.”

The overall goal is to reduce the wolf population within the Bluenose-East and Bathurst winter ranges between 60 and 80 per cent.

According to department numbers, a single wolf can eat between 23 to 29 caribou per year.

The aerial cull is part of a joint five-year plan between ENR and the Tłı̨chǫ Government.

In March, the Wekʼèezhìi Renewable Resources Board (WRRB) approved the wolf management program to go ahead as a pilot project for one year while proponents come up with a longer-term solution.

When ENR and TG first proposed the plan in January, it called for the removal of 300 wolves. Since then, the department has revised the numbers “based on new information from harvesters, aerial surveys and other field work carried out in March.”

Now the targets are 27-37 wolves within the Bathurst range and 66-90 within the Bluenose-East range. The new numbers represent a 58 per cent reduction — at least — since the plan was first proposed.

The wolf management plan says that an aerial cull would only happen if “ground-based efforts by hunters” do not meet the reduction goal by March 15 every season.

The WRRB approved the plan on March 13.

The plan reads, “Given the vast area of the central barrens, it is unlikely that ground-based harvesting on the winter range, even by harvesters from both the North Slave Region and Nunavut, can reduce wolf numbers to the level needed to increase survival rates in caribou.”

The wolf hunting season opened on August 15 in the North Slave region. According to Oosenbrug, hunters have taken fewer than 25 wolves from the herds’ winter range between then and early April.

“If more harvest occurs, we will adjust the number of wolves that need to be removed via aerial removal,” she said.

ENR changed the North Slave Wolf Harvest Incentive Program in an attempt to get more harvesters to remove wolves. This season, hunters didn’t need to pay for tags and they could receive more money for carcasses — $1,200, up from $900 last season.

However, despite the season opening in mid-August, the new amount for pelts only started on January 24 this year, less than two months from the deadline for an aerial cull.

Oosenbrug said this was because the caribou herds don’t come into their winter range until December.

“Increasing incentives in January also allows harvesters to take advantage of the winter road season and it targets the time period when furs are in their prime,” she added.

Of course, the cull is happening against the backdrop of a global pandemic.

CKLB asked what measures are being taken to respect the social distancing orders in place from the chief public health officer.

If social distancing cannot be maintained during aerial fieldwork then the following measures are in place:

Correction, May 7: The previous headline of this story read that the Department of Environment and Natural Resources paid $91,000. In fact, that is the contract worth. The payment total will depend on hours flown. This total will only be available once the work is complete and invoiced.


“(Aerial removals) didn't appear to get to the target levels that they were hoping to reach for the required program to be considered effective and successful,” says Jody Pellissey, the Wekʼèezhìi Renewable Resources Board's executive director.


Nearly 150 caribou have been harvested illegally so far this winter.