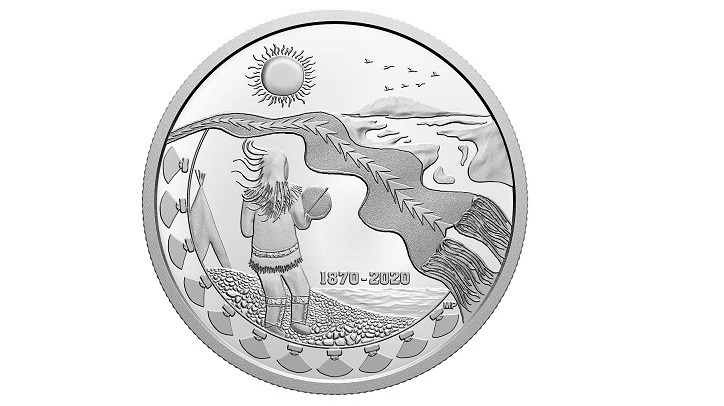 Myrna Pokiak, an Inuvialuit artist, has designed a collector coin that reflects the Inuit, First Nations and Métis peoples who shape the Northwest Territories.

This was part of an initiative by the Royal Canadian Mint to celebrate the territory’s 150th anniversary.

“All the submissions were honestly great,” she says, “what made her [Pokiak’s] design standout… It was a really compelling story.”

Pokiak says storytelling has always been a component of her art.

“It’s very important to be able to pass on those stories and the teachings,” she says, “and I think art’s one way to do that.”

Pokiak, originally from Tuktoyaktuk but now living in Yellowknife, says she spent around a month working on the design trying to find the best way to convey her home.

When she was informed her submission was selected, she was overjoyed her hard work paid off.

“I’m still quite in awe and in shock,” she says.

A sash down the middle of the coin was intended to represent the Métis as well as the Mackenzie River, she says.

“The Mackenzie River sort of ties all three groups together,” Pokiak explains.

Historically the river was used for trade and transportation from community to community.

There is also a tipi which represents the Dené.

“That image of the tipi on the land can be seen in age-old hunting camps,” she says.

While the Inuvialuit are represented by ulus along the bottom of the coin.

“It’s a symbol that is representatives of us no matter where we live,” Pokiak says.

There are 11 ulus to represent each of the NWT’s official languages.

The coin includes a drummer beneath the midnight sun and geese in flight. The geese symbolize the connection between the NWT with the rest of Canada and the world.

A reflection of culture

Alex Reeves, public affairs manager at the Royal Canadian Mint, says the initiative’s aim is to showcase life in the NWT.

“Coins, no matter which country you’re from, is really a reflection of its people,” Reeves says.

“So our coins basically tell the never ending story of Canada and that certainly includes our Indigenous cultures,” he says. “As part of a celebration of art, there’s no question that Indigenous art is a pillar of Canadian culture.”

IRC calls out violence against Mi’kmaq fishers in Nova Scotia

Paddle Prairie Residents worried about their homes after evacuation