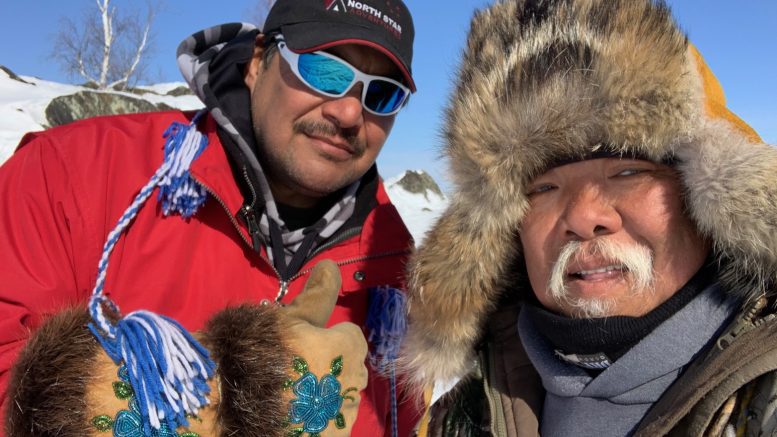 Left: Joe Bailey of North Star Adventures is calling on the GNWT to provide support to the struggling tourism industry. (Photo courtesy of Joe Bailey)

The owner of an Indigenous tour company is calling on the territorial government to provide additional support for his struggling  industry.

The global COVID-19 pandemic, which shut the NWT’s borders, has forced North Star Adventures owner, Joe Bailey, to lose his entire customer base and subsequently refund $50,000 to prospective clients.

“Talk about getting kicked when you’re down,” Bailey says.

In order to stay afloat, Bailey had to layoff his employees and run the company on his own. Despite this, he remains confident North Star Adventures will survive the pandemic.

North Star Adventures is now reliant on federal funding — through the Northern Business Relief Fund — which he expects will hold until December.

“Thank goodness for the federal funding, otherwise, yes we would’ve been closing,” he says.

Jess Fortner, director, tourism and parks with the Government of the Northwest Territories says the federal government has put a major focus on helping businesses in the immediate  — while the GNWT has focused on the longterm. This is through loan programs, SEED funding and wage top up programs.

But Bailey says this isn’t enough.

“I think the Government needs to step up and direct some special funding to tour companies since the borders are closed,” he says.

Bailey says he recognized how serious COVID-19 was early.

By the end of January 2020, North Star Adventures began screening customers from areas where the virus was active.

In March, as COVID-19 was declared a pandemic, the NWT closed its borders and shut down all non-essential businesses.

In June as the number of cases trended down across Canada, a group of business leaders calls on the GNWT to loosen travel restrictions to aid the suffering tour companies.

However, despite losing an entire customer base, Bailey agrees with the GNWT’s strategy of closing the border.

“I agree with it, as much as it goes against my business,” he says, adding safety must come first.

But he adds, the local tourism industry requires more support from the GNWT in order to stay in business.

There is no question the tourism industry has been the hardest hit, Fortner says.

And this comes at a particularly unfortunate time, as the industry was targeted as a key area for the territory to develop.

Historically, the NWT’s economy has been reliant on mining, but in recent years diversification has been a major focus, Fortner explains.

“We’ve got wonderful wilderness, rich culture, plenty to share with the world,” he says.

And the industry was booming according to statistics provided by Fortner. In 2018-19 a record 120,000 visitors stepped foot in the NWT, surpassing spending targets.

For every million dollars invested, 5.4 jobs are created in the tourism sector compared to 1.7 in mining. Approximately one in every 14 jobs are tied to tourism industry.

For the past five years, tourism has experienced consistent growth, accounting for 2 per cent of the territories GDP.

“There’s no question, tourism is a big part of the economy,” Fortner says.

However, this all changed in March.

“We were really, really hot prior to COVID,” Fortner says.

Pivoting in a pandemic

Until the pandemic ends, Bailey says he continues to “pivot” his business, offering a shuttle service to the Ingraham trail as well as canoe and camping rentals.

Bailey says he’s continuing to offer tours for a staycation promotion, but adds it hasn’t been very popular as many residents have their own supplies and don’t want to pay for a tour.

“They have their own vehicles,” he says, “so it really hasn’t been helping us that much.”

He did run a canoe tour on the Mackenzie River in July and is planning a second one in mid-August which still has spaces available.

Although the situation currently looks bleak, Fortner says he believes tourism will return to the NWT once the pandemic has passed and travel restrictions loosen.

“I think in the longterm, human beings have an innate need and desire to explore,” he says, “when and to what to degree? I can’t tell you.”

‘We haven’t heard from anyone in two months’: LKDFN Chief discusses Frontier Lodge