Approximately 100 years ago a wildfire left Dettah smoldering, giving it the name which translates to “bunt point.”

In order to ensure this, the Yellowknife Dene First Nation (YKDFN) and the City of Yellowknife partnered to launch a wildfire preparedness workshop, testing out a sprinkler system.

The plan involves placing the sprinklers in strategic locations to dampen any potential kindling, protecting structures within the three communities.

“We make the kindling wet so the houses don’t burn,” explains Albert Roach, owner of Fire Services Ltd., who installed the sprinklers.

Eric Bussey, director of public safety, says the system acts as a last line of defence to protect the communities from an approaching fire.

City and YKDFN staff, representatives from the GNWT, as well as community volunteers were trained on how to use the new system Thursday and Friday at the Chief Drygeese Centre in Dettah.

“Firefighters in the event of a fire approaching, they’re going to busy,” Bussey says, “so our friends in public works and community services will help deploy the kits if we need them.”

At the workshop on a sunny Friday morning was Dettah Chief Edward Sangris, who spoke about the significance of the project and the importance of collaboration between the communities.

“This all stems from reconciliation with the city,” he says, “by demonstrating what we can do when we work together, it makes members of our community feel safer.”

The project was part of a federal funding initiative, granting the city and YKDFN over $176,000 to protect against the effects of climate change, specifically wildfires.

“This project is to reduce a common threat that we have as communities,” says Yellowknife Mayor Rebecca Alty, at the event.

In the fall, the communities will work together again, organizing a cleanup in various areas of kindling that could fuel a wildfire. 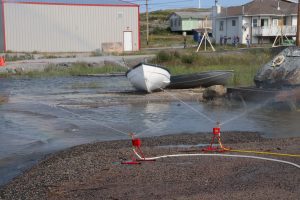 The sprinkler system is designed to be a last line of defence against an approaching wildfire. (Photo by Luke Carroll) 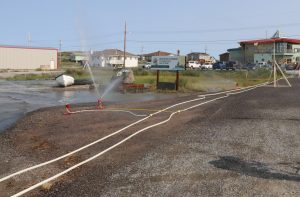 A fire prevention workshop was hosted for city and YKDFN staff as well as community volunteers to learn how to use the sprinkler system. (Photo by Luke Carroll)

Trial begins for Ndilo man charged with sexual assault, forcible confinement while out on bail for same offences