That’s how Nadine Delorme-Simon characterizes the payments from the Sixties Scoop settlement.

It’s also a recognition of the “cultural genocide” she had to endure as a survivor of the Sixties Scoop.

Across Canada, survivors like Delorme-Simon have started receiving interim payments of $21,000 from the settlement. These are not the final amounts, but were approved to go out to the more than 12,000 survivors who have already had their claims accepted.

The final payments have been delayed due to the COVID-19 pandemic. Survivor organizations have been vocal in demanding the courts approve interim payments to get the money in the hands of survivors as quickly as possible, with the balance being paid out once the rest of the claims have been processed. There are still more than 20,000 claims to be processed of the 34,767 total.

When her cheque arrived, Delorme-Simon says it was “surprising the feelings I didn’t have from seeing it.”

She started writing down a list of bills the money would help pay off.

“Maybe I compartmentalized it at that moment a little bit,” she says. But once she shared its arrival with others, “that’s when I became emotional.”

“I was like, ‘Wait a minute, this is real. This cheque is real. It’s real what happened. I didn’t just make it up’,” she says.

The Sixties Scoop refers to a period between the late 1950s and early 1990s when tens of thousands of Indigenous children were put into the foster care system and adopted into non-Indigenous families.  Official numbers are hard to come by, but the settlement with the federal governments identified upwards of 22,000 people that were eligible. However, that is only a rough estimate and excludes Métis children.

“The Defendant’s actions authorized a child welfare program that systemically eradicated the culture, society, language, customs, traditions, practices and spirituality of Indian children in each province and territory,” reads the settlement with the federal government. And adds of survivors, “Each is a person who, as a child, lost her or his cultural identity.”

An ‘odyssey’ back to the North

Delorme-Simon was born in Toronto to Barbara Delorme.

She says she recently learned that she was taken immediately from her mother when she was born and placed into the foster care system.

“I found out last year when my files were released, it was from day one,” she says.

Delorme-Simon bounced around the foster care system before being adopted by a white family. 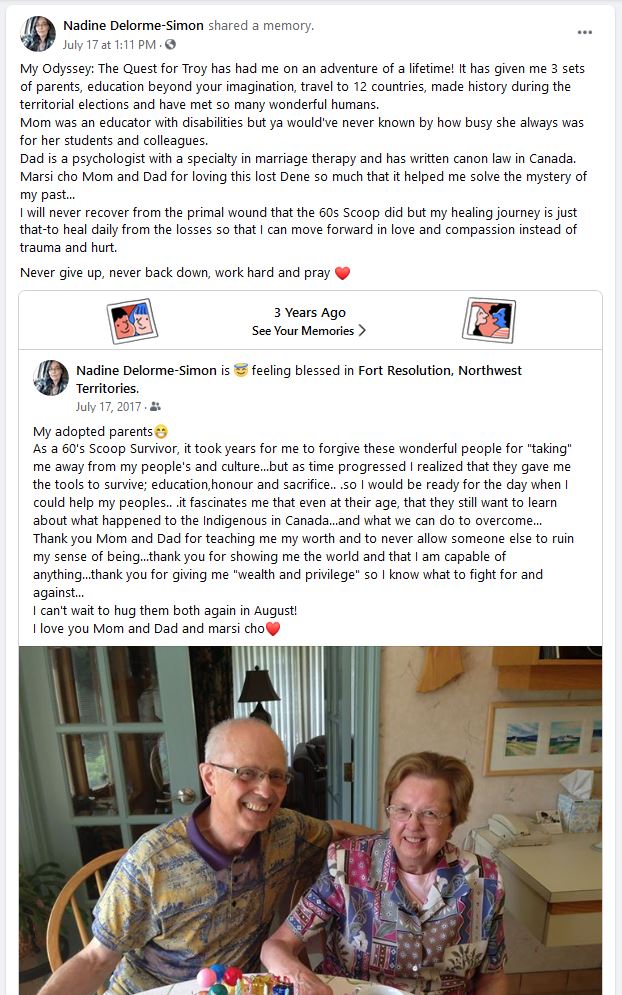 She attended the Etobicoke School of the Arts where she says her “odyssey” to find her roots in the North began.

“The people I met there opened my eyes that I’m worth something, that I have potential,” she said.

Delorme-Simon had her first daughter at a young age; that event also pushed her to find her Indigenous identity, especially, she says, after the baby’s father left.

“When her dad threw me away and said you’re worthless just like your mother, I realized I had nothing to give (my daughter) other than trauma.”

Her search led her to the community of Deninu Kųę́, where she’s been living since 2014. The transition to life in the North has not always been easy.

Since moving to the community, she’s married elder and former mayor Richard Simon. In their time together, Simon says his wife has opened his eyes to some of the trauma he suffered at residential school.

Delorme-Simon has still never met her biological parents. And earlier this year, she learned that she would never meet her birth mother—who died in 2012.

When she heard this in February, she started planning a trip back to Toronto where Barbara Delorme is buried.

And then a worldwide pandemic hit.

“Now, I can’t symbolically stand at her grave and say the goodbye I need to say.”

Shortly after learning about her biological mom’s death, Delorme-Simon’s adoptive mother also passed away in April.

She says the relationship with her adoptive family is strained, making it “very difficult to grieve and mourn this loss.”

A northern voice for survivors 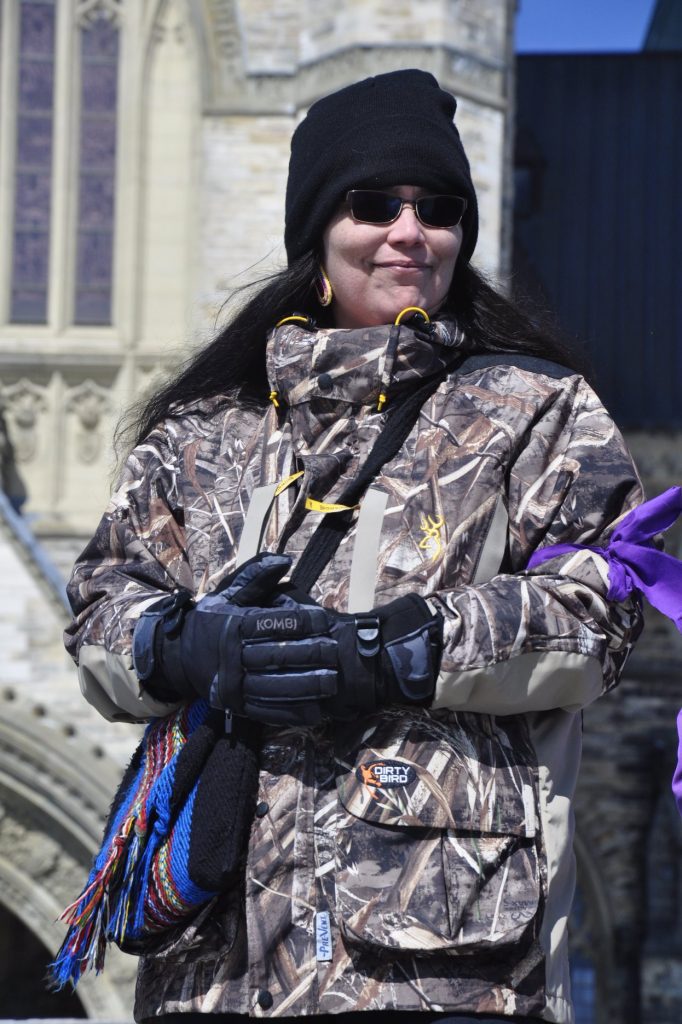 Delorme-Simon is now focusing her efforts on creating an organization to help other Sixties Scoop survivors reconnect with their roots.

In 2018, she participated in a survivor gathering on Parliament Hill and spoke about the need for more northern voices when it comes to the Sixties Scoop.

She says her organization would help offer that voice and be a resource for those looking for “repatriation”.

While still in the early stages, she hopes to create a curriculum on the Sixties Scoop and help connect survivors with healing services. She’s also pushing to make it easier for survivors who, like herself, didn’t have access to programs they could have had as a member of an Indigenous organization growing up.

However, she acknowledges these plans are her view.

“It’s not the view of all survivors, not all of them want to come home either,” she says.

She also hopes sharing her story gives others the strength to share one day.

“Take your time,” she says. “I have to trust putting the story out there, there will be people that understand it … Maybe it’ll give them that extra day of ‘I can make it’.”