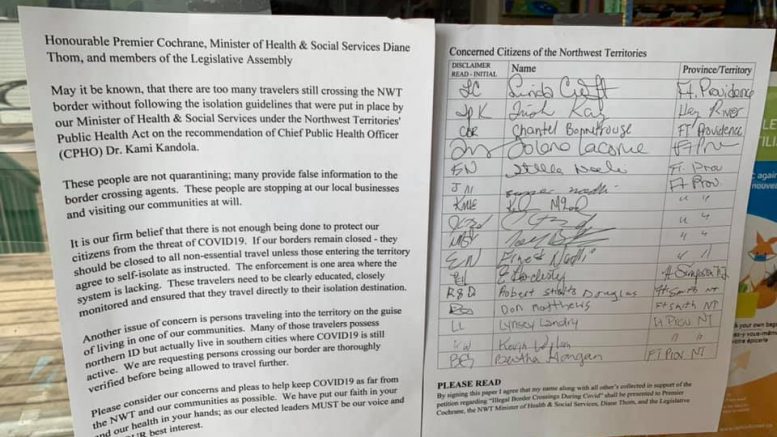 A petition was launched in Fort Providence to ensure visitors are following quarantine protocols. (Photo from Facebook)

Linda Croft says she finds herself kicking travelers out of Fort Providence several times a week.

Croft, an employee with the Big River Service Centre, launched a petition demanding the Government of the Northwest Territories ensure visitors follow protocol.

She says visitors risk bringing COVID-19 into her community.

Deh Gah Got’ie First Nation Chief Joachim Bonnetrouge agreed, people entering the area from outside the territory are a concern.

He says the proximity of his community to the highway puts the DGGFN at risk and he even implemented a check stop at the entrance at one point. The check stop has since been taken down.

Umesh Sutendra, a spokesperson with public health, says in an email keeping the border safe “is one of the most critical pieces to ensure that we reduce the risk of COVID spreading throughout the NWT.”

In order to ensure people are following protocol, Sutendra says people can contact Protect NWT and a taskforce will investigate complaints. Fines of over $1,700 could be issued for breaking quarantine and seven tickets have already been handed out in the past few weeks.

Croft says she puts this service to use regularly.

“I call quite frequently, I think [they] know me by heart,” she chuckles.

Despite the demand, Croft says she believes the GNWT has done a pretty good job handling the pandemic. She credits them with a quick response that has kept the territory safe.

But adds she wants the responsibility of keeping the border protected to be on the government — not on her.

Croft lists several examples of tourists from outside the territory entering off the highway with intentions to spend the night in the community. She says more needs to be done to ensure people are aware of quarantine rules and a way to keep track of those not following them.

Chris Mitchell, who runs the Big River Service Centre, says he will serve these people gas as he feels he has no other choice.

“If we don’t serve them gas, where are they going to get it? Can’t have people who are stranded,” he says.

But adds he ensures everyone is following health protocols.

Croft says she has no problem serving travelers in need of gas. But those who explore the town and attempt to spend the night are putting her and her neighbours at risk.

“Not knowing whether they’ve isolated or not is a scary feeling,” she says.