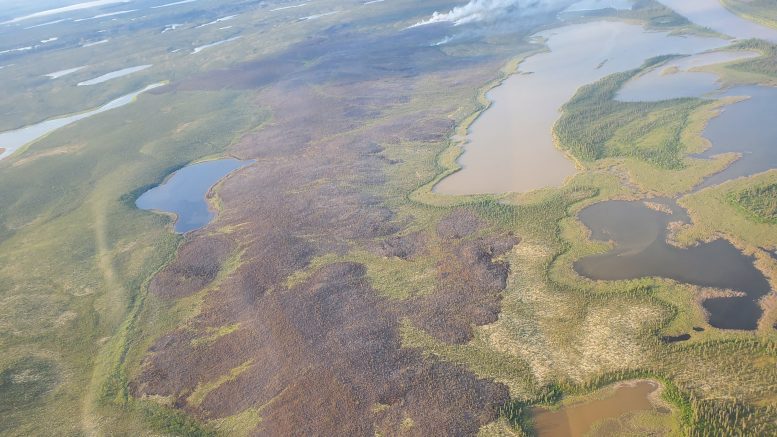 A fire is approximately 12 kilometres south of Inuvik. Crews, helicopters and air tankers have all been working on the fire. (Photo courtesy of the Department of Environment and Natural Resources)

Firefighters are on the scene of a large wildfire which has been burning near Inuvik since Friday evening.

Four more fires have been reported across the territory in the last 24 hours, bringing the total number of active fires to 18.

The largest active fire is 12 kilometres south of Inuvik, around 254 hectares in size, says Amber Simpson, wildfire prevention coordinator at the Department of Environment and Natural Resources.

The current air quality risk is low in Inuvik, a press release says, as wind has been moving smoke away from the town.

The wind forecast does not indicate the community will be exposed, but this may change, the release says.

Six firefighter crews, two helicopters and one air tanker are currently on the scene. The fire is 80 per cent contained and the cause is currently under investigation, she says.

This forecast index map breakdowns the varying degrees of fire weather risks around Canada for the June 29th 2020. (Photo courtesy of Environment Canada)

Fires across the NWT

Three of the recent fires in the the South Slave region were caused by lighting, Simpson says. The fire closest to a community is approximately 355 kilometres east of Fort Smith.

Fires are also being monitored in the North Slave region, one approximately 125 kilometres northwest of Gamètì is 44 hectares in size, Simpson says.

Another fire, approximately three kilometres south of the Ingraham Trail, near the 54 kilometre marker, was 15 hectares in size and is being reassessed for hotspots before it can be declared out.

Fifteen fires have officially been declared out.

Wildfire danger remains high to extreme across most of territory, Simpson says.