Misty Ireland is the founder of Dene Roots. (Photo courtesy of Samantha Stuart.)

Misty Ireland says the typical western world of entrepreneurship often doesn’t fit with Indigenous culture and practices — but she adds there is an exception, EntrepreNorth.

EntrepreNorth is a northern entrepreneurship incubator that offers programming to empower Indigenous and community-based businesses across all three territories.

“Some of the concepts in your standard western model for entrepreneurship don’t quite mix with the spiritual and cultural motivations behind why an Indigenous person would go into business,” she says. “And I found that EntrepreNorth has done a really good job at helping things be relatable to an Indigenous perspective.”

Ireland is the founder of Dene Roots, a company that creates smokeless smudge sprays, something she invented after staying in hotels with smoke-free policies.

Ireland, a Dehcho Dene woman from the Tthek’éhsehdélı̨ First Nation, began making the smudge sprays as a hobby.

She calls her process of developing products “Dene science” — lessons and teachings that have been passed down to her through generations.

She says each blend of smudge sprays is inspired by stories from Elders.

“I wanted those teachings to be taken seriously,” she says.

The sprays, which she gave away as gifts to friends and family, became an instant hit in her community.

Three years ago, as the products grew in popularity, to the point people she didn’t know wanted them, she developed a new idea — starting her own business.

Dene Roots became a cohort with EntrepreNorth and now sells a series of smokeless smudge sprays through a Shopify online store. 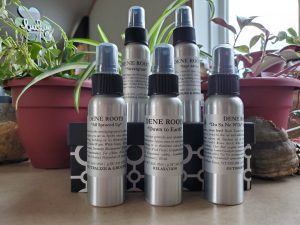 EntrepreNorth recently launched a partnership with Shopify that offers educational support to entrepreneurs in the North as well as a free subscription to Shopify for six months to cohorts of the program.

The next Cohort with EntrepreNorth will focus on circumpolar fashion — handmade Indigenous fashion products — and applications for the program are open until June 30.

Cowan adds consumers want to support Indigenous-run businesses and e-commerce allows for northerners to sell their products on a global scale without leaving the communities.

Ireland says she is excited by the collaboration between EntrepreNorth and Shopify as she enjoys using the e-commerce platform to sell her products.

“I found it to be very user friendly, very easy and it works really well,” she says. “So it was a really good move for Dene Roots.”

Ireland began using Shopify when it was recommended by some of her peers in EntrepreNorth.

Cowan says the partnership between EntrepreNorth and Shopify was an easy match, as the Ottawa-based company has launched a new program focussed on helping Indigenous entrepreneurs succeed.

“It’s a partnership that we’re really excited for,” Cowan says.

Happy National Indigenous People’s Day! And Happy Father’s Day to all the fathers out there.

The future of e-commerce in the North

Shopify’s partnership with EntrepreNorth is part of a series of Indigenous programs it is offering in Canada and New Zealand.

Cowan says e-commerce is a part of the future, something that has become more evident with COVID-19.

The virus is changing shopping habits across the world, as many people now buy products online to ensure social distancing, she says.

However, she recognizes an obstacle the North faces is limited access to internet.

“We really do believe that internet should be a human right,” Cowan says.

In the meantime, Cowan encourages people to continue supporting Indigenous run businesses such as Dene Roots.