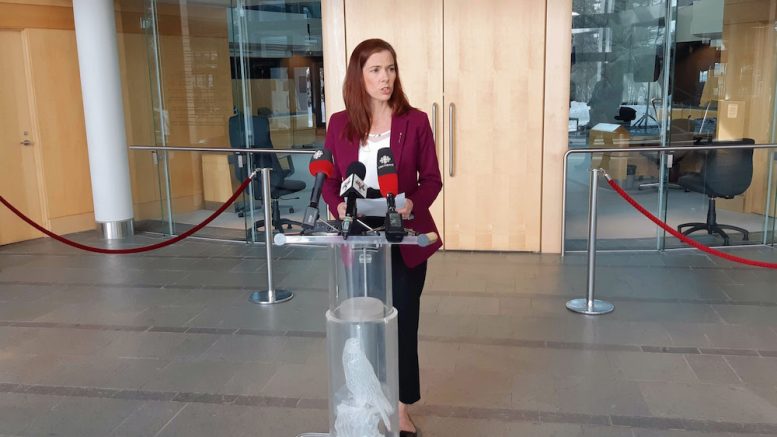 The territorial government has announced a slew of measures to support the NWT economy through the COVID-19 pandemic.

The majority of those measures are aimed to help businesses weather the economic storm that is not likely to ease any time soon.

The total “relief package”, as the government calls it, totals $13.2 million.

However, not all of that is new money.

Indigenous governments signed on to devolution, for example, will get advance payments for resource royalties—so not new but faster cash.

Indigenous and community governments will also be able to keep any unused contribution amounts from last year’s budget.

Dene National Chief Norman Yakeleya has been one of several Indigenous leaders calling for people to go out on the land as a way to self-isolate and prevent the spread of COVID-19.

CKLB asked if there would be any money to reimburse people that have expenses for on-the-land trips.

“Normally that program would roll out a month at a time,” she said. “As of April 1, they get their full 12 months worth of funding so hopefully that provides quite a significant amount of injection to harvesters who need that kind of support.”

Wawzonek also pointed to the $305 million announced by the federal government earlier this week dedicated specifically to help Indigenous communities.

“We’re still working with the federal government to figure out exactly what that’s going to mean and how that’s going to unfold,” she said. “I believe they are very alive to the fact that Indigenous communities are considered to be at higher risk as well as northern communities where we have particular challenges.”

Much of the relief package’s measures for businesses are funneled through the territory’s Business Development and Investment Corporation.

Specifically, BDIC is getting an additional $5 million and will be offering low-interest loans for new and current clients that have taken a hit due to the pandemic.

Businesses will also be able to defer three months-worth of loans between April 1 and September 30 of this year.

Minister Wawzonek was asked why much of the GNWT’s plan was focused on support for businesses.

“What we saw coming out of the federal government was particularly targeting ways at getting money to individual citizens pockets,” she said. “We are looking at ways to make sure we fill in other areas of need.”

The minister said that businesses looking to access the BDIC money should use their usual channels to do so.

She added that the government wants “to get the money out quickly.”

Other measures announced on Friday include the removal of fees for “northern supply chain businesses”, including the Deh Cho bridge tolls, truck permits and airport landing fees.

These fees will be put on hold until the end of June.

The GNWT has allocated an additional $2 million to the territorial income assistance program.

It has also committed to pay its invoices more quickly to northern businesses.

The due date for the Workers Safety and Compensation Commission has been extended from April 1 to May 1.

Student loan payments have also been deferred to September 30 without charging interest until then.

Finally, as previously reported by CKLB, the relief package reiterated that the Northwest Territories Power Corporation will remove all power limiters, will not be disconnecting any residents and will pause collection efforts.

The government presented this as an “initial” relief package.

Asked about the possibility of additional funding down the line, Minister Wawzonek said, “The priorities are going to be to respond to the situation as it evolves.”

“We’re really just looking to do things as quickly as we can but still be responsible about it,” she said.