Wildfire near the Taltson River from 2019. (Photo courtesy of ENR.)

According to the department of Environment and Natural Resources, over half of the wildfires currently in the NWT have been human-caused.

As of today, 16 wildfires have been reported, nine of which are man-made.

With a total of six active fires within the territory, affecting an area as large as 4,687  hectares.

Crews and tankers are currently responding to a fire in the South Slave region approximately 50 km east of Hay River.

“We are sitting below average for what we’d expect this year,” said Richard Olsen, wildfire operations specialist.

Although risk levels may have been be low to moderate within the territory, the human element plays an unpredictable role in managing the risk.

When asked about how neighbouring communities should prepare for the event of a fire, Olsen said, “The biggest thing we could do at this time is to look after our own properties and stay updated with Fire Smart.”

In an effort to limit the risk, the  City of Yellowknife has placed a city-wide and parks-based ban on open fires due to increasingly dry conditions, just last week.

The charts below are a fire danger level forecast for the upcoming few days. 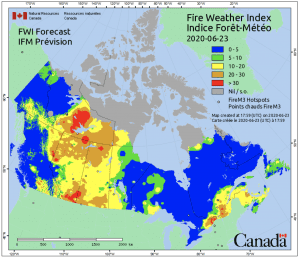 (Photo courtesy of Environment Canada) This forecast index map breaks down the varying degrees of fire weather risks around Canada for June 23rd, 2020.