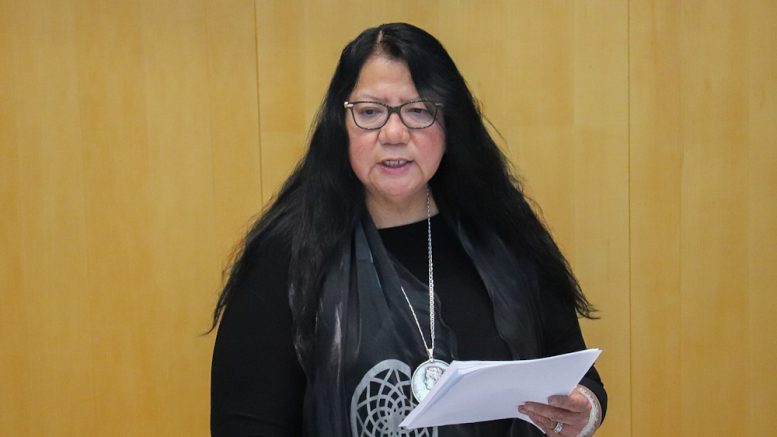 Thebacha MLA Frieda Martselos wrote that she is disappointed that Yellowknife city council rejected the GNWT's bid to establish a temporary homeless shelter at the former Legion building. (Francis Tessier-Burns/CKLB).

Thebacha MLA Frieda Martselos wrote in a letter that she supports the department of health and social services (HSS) in its efforts to establish a temporary day shelter in downtown Yellowknife.

She adds she is disappointed that Yellowknife city council voted against the GNWT’s application to turn the former Legion building into the temporary shelter, finding it “disturbing” that business owners would take a stand against “impoverished people.”

“As a concerned elected leader in the NWT, I have been closely watching this situation, and frankly I am shocked and disgusted with the amount of systemic racism from both residents and businesses who are against the proposed temporary day shelter at the old Legion building on Franklin Avenue,” she writes. “For people to compare a temporary day shelter to that of a crack dealer living next door, or for elected leaders to compare the pain of 60’s scoop survivors with the pain that businesses feel from the pandemic, is not OK.”

The letter also discussed how winter is only weeks away and this is the second year in a row city council rejected an application to establish a temporary shelter due to concerns from local businesses.

“It is attitudes like these which only functions to reinforce and amplify racist stereotypes and stigmatization of the homeless population. Is this what reconciliation is all about?”

Martselos wrote that the long term goal is to build a new permanent shelter space, but that is still years away.

“We must make do with what we have right now to address the immediate needs of the homeless,” Martselos concludes.

“Their letter asserts that placement of the temporary day shelter at the location in question, will, “place the short-term burden disproportionately on downtown business owners…”. Well, how about the burden and stress that the homeless carry daily without having a warm place to go?” she writes.

The Yellowknife Chamber of Commerce wrote in their letter that other options for the temporary day shelter exist, but requires investment the GNWT refuses to provide.

The Yellowknife Chamber of Commerce letter was sent in late September in response to Green encouraging residents to support the Legion building as the temporary shelter.

The Chamber of Commerce letter stated, “Your [Green’s] language makes clear that you intend on vilifying any opposition to your decision. Business owners have valid objections to your decision and they deserve to be heard; this is why the appeals process exists. You should not seek to undermine that process.”

When asked what HSS’s plans are now that city council rejected the application for the old Legion building, Green told CKLB in an email the department is “exploring all options.” She added she was disappointed by city council’s decision.

“The underhoused population in Yellowknife are residents and deserve the same compassion that any member of our community deserves when in need,” she wrote.

One of those options would be for Shane Thompson, minister of Municipal and Community Affairs to declare a state of emergency, which would give the GNWT the authority to use the former Legion building. In an email, Thompson told CKLB his department is “working to determine what the next steps will be” but gave no other details.

As temperatures dip, little progress made on temporary day shelter