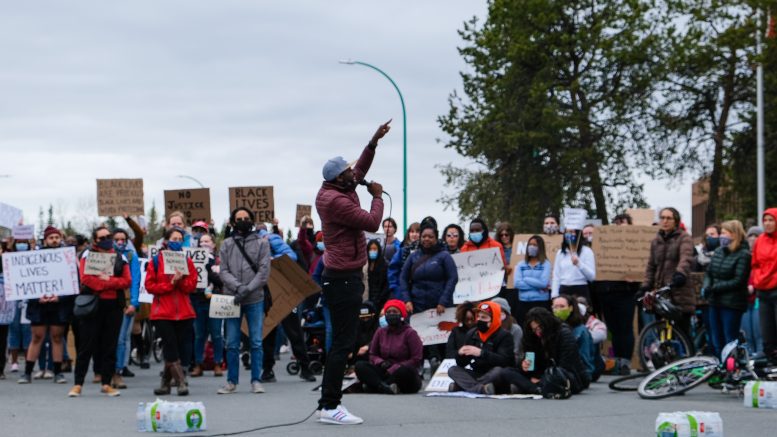 An anti-racism demonstration was held in Yellowknife on Tuesday afternoon. The event brought hundreds of people together. (Photo by Francis Tessier-Burns)

“Enough is enough,” hundreds of people chanted outside the RCMP detachment in Yellowknife.

The chants were part of an anti-racism demonstration held Tuesday afternoon.

The event brought hundreds to the multiplex for a solidarity motorcade to ensure social distancing. The speeches were planned to be live streamed — but organizers decided to go forward with live speeches and held them outside the RCMP Yellowknife detachment.

Organizer Ambe Chenemu addressed the crowd first, speaking about racism in Canadian society, both past and present. He also called on allies to no longer ignore racism when they see it.

The speeches went on for over an hour an a half discussing numerous subjects, including the plight Black and Indigenous people have had to face while dealing with the police.

Recent examples were brought up, including Chantel Moore, an Indigenous woman from British Columbia who was killed by police during a wellness check in New Brunswick. As well as a Nunavut man who was hit by the door of an RCMP vehicle while intoxicated.

Ndilo Chief Ernest Betsina spoke of the racism he has faced as an Indigenous man.

“As an Indigenous man I represent a people who suffer and continue to suffer because of residential schools,” he said.

The Yellowknife protest echoes those ongoing in the United States, which started after several unarmed Black people were killed at the hands of the police.

Breonna Taylor, who would’ve celebrated her 27th birthday last week, was among those killed. Taylor, an EMT, was shot by police eight times at her apartment in Louisville, Kentucky. Police described the situation as an attempted drug sting operation — no one has been charged in her death.

The event was held on the same day as George Floyd’s funeral, the man who sparked the now global protest.

Floyd, an unarmed Black man, died in police custody after a video captured a white police officer with his knee on the back of his neck for nearly nine minutes.

“I can’t breathe,” the crowd chanted, a rallying cry to the Black Lives Matter movement, one of the last things Floyd said before he died.

“The world is ready to change,” she said. “As a community we must recommit to changing ourselves.”

Also in attendance was  Mayor Rebecca Alty as well as several RCMP officers.

Chenemu thanked the officers for attending, but also admitted the police no longer have the trust of marginalized communities and they need to earn it back. He also acknowledged the lack of diversity within the RCMP.

“Defund the police,” was chanted at several points, a new initiative pushing governments to redistribute police funding to other departments including mental health resources.

“Say it with confidence, because it’s the right thing,” Chenemu responded to the chants.

The demonstration ended with everyone in attendance taking a knee.

The event was organized by a variety of community members and promoted by the Public Service Alliance of Canada, the union representing federal government workers. 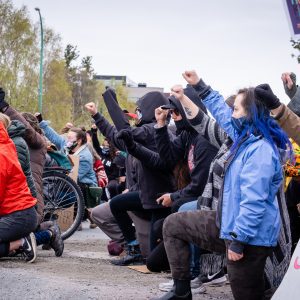 The demonstration ended with demonstrators taking a knee. (Photo by Francis Tessier-Burns) 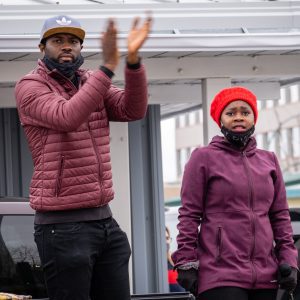 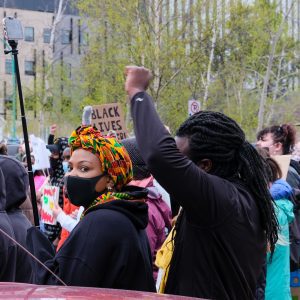 Demonstrators showed their solidarity with protesters in the U.S. (Photo by Francis Tessier-Burns) 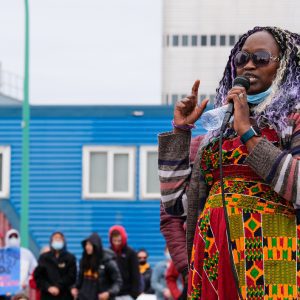 Hawa Dumbuya-Sesay spoke at the demonstration. Originally from Sierra Leone, the mother of four called on demonstrators to think of future generations. (Photos by Francis Tessier-Burns) 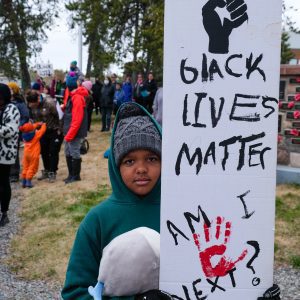 Demonstrators, including 10-year-old Here is 10-year-old Jahmiah Ashley, made signs showing their support to the Black Lives Matter movement. (Photos by Francis Tessier-Burns) 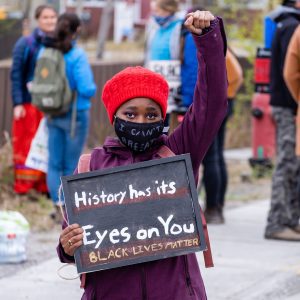 Olivia Williams spoke passionately at the event, calling on demonstrators to “use the backbone you were born with” to fight against racism every day. (Photos by Francis Tessier-Burns) 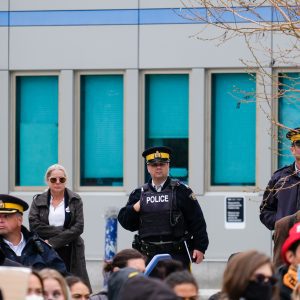 RCMP officers were in attendance. (Photos by Francis Tessier-Burns) 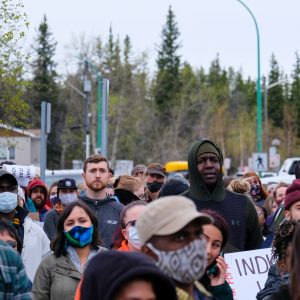 Several hundred people were in attendance for the demonstration. (Photos by Francis Tessier-Burns) 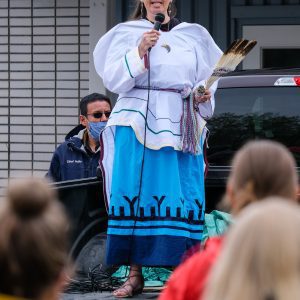 Gerri Sharpe spoke of her interactions with police, saying she’s often been asked what tribe she’s from, but Inuit do not have tribes. (Photos by Francis Tessier-Burns) 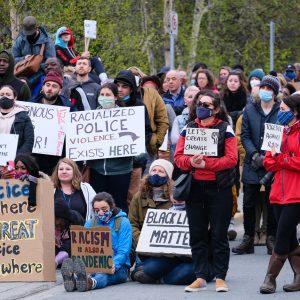 The demonstration had people of all ages in attendance. (Photos by Francis Tessier-Burns)

Anti-racism motorcade to be held in Yellowknife