Chief Supt. Jamie Zettler is the commanding officer of RCMP 'G' division. He's the head of police in the NWT. (Francis Tessier-Burns/CKLB.)

Whether people are treated fairly by police — including appropriate use of force — comes down to perceptions.

That’s according to Chief Supt. Jamie Zettler, the commanding officer of the RCMP in the NWT.

Zettler basically reduced the issue of systemic racism to cases of he said, she said.

“No matter how many incidents are there and how many cameras and how many different lenses, they don’t always capture what the people’s perspectives are,” he told reporters Friday afternoon. “And I think this is where a lot of the systematic racism that is talked about these days is brought forward. People have different perceptions based on their life experiences and how they’ve been treated.”

Zettler acknowledged there is likely racism in the RCMP, but only as a byproduct of society, and not whether it was more prevalent in policing.

“It’s fairly clear, like we’ve seen in the last number of weeks and previously, that there are individual communities that feel they are not treated fairly,” he said. “I believe that society has evolved and there’s racism in sodciety, we are part of our society here in our country and if it exists in our country then it’s going to exist in all organizations. The RCMP is no different than any other organization or society.”

However, one considerable difference is police are currently allowed the use of force, which can lead to violent interactions. 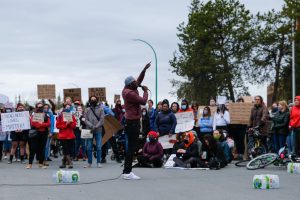 An anti-racism demonstration was held in Yellowknife on Tuesday afternoon. The event brought hundreds of people together. (Photo by Francis Tessier-Burns)

CKLB asked Zettler if he believed members of the public that brought forward cases of police brutality and what the police’s role in closing the perception gap around the use of force.

He said officers are trained and review the use of force, including the Incident Management / Intervention Model. He added that force is used in “a very low percentage of our engagement of community peoples”.

“How people in diverse communities see their interactions,” said Zettler, “it’s difficult for us to be able to understand everybody’s feelings and whatnot.”

However, just this week, hundreds of Yellowknifers spent hours on the street in front of the Yellowknife RCMP detachment sharing exactly how they felt about police; as have thousands of people across the world over the past few weeks through marches and peaceful protests.

A case close to home

Zettler’s comments are set against a backdrop of a recent case of a Yellowknife man alleging he was physically assaulted by Yellowknife RCMP.

As first reported by APTN, Benjamin Manuel claims he was walking home from work Wednesday evening — the day after the anti-racism protest in Yellowknife — when officers accosted him, handcuffed him, put him in the back of their vehicle, drove away and later took him out and beat him up.

He says officers left him unconscious in the road and didn’t call an ambulance for him.

During the news conference, Zettler wouldn’t confirm any details other than to say the incident had been brought to the Yellowknife detachment’s attention.

“We need to know what the information is and what occurred before we can make any statements,” he said.

The name of an officer believed to be involved has been circulating social media. Reporters asked whether an officer by that name worked at the Yellowknife detachment and if he was involved in the incident. Zettler would not confirm.

Below is the full news conference.

The RCMP will be receiving $47 million this year to conduct policing in the NWT.

CKLB asked Zettler how that money will be used to improve relationships with communities.

He said detachment commanders meet with community leaders to develop “local priorities”, as well as an Indigenous consultative group that has representation from across the NWT. He said the RCMP also reports annually on those plans to communities and the territorial government.

“How we utilize that money to develop these relationships varies from place to place,” he said.

During the news conference, Zettler referred several times to there being a process whenever a member of the public brought forward a complaint.

“We have multiple processes in place … Depending on what the circumstances are,” he said.

This means incidents of alleged violence are still only dealt with on a case-by-case basis.

Zettler didn’t give specifics when asked what improvements could be made to policing in the NWT.

After praising his officers, he said, “Is there areas that we can improve? Without a doubt.” And added, “We need to keep moving forward and taking steps in the right direction.”

The effectiveness of body cameras to reduce police violence is mixed. The RCMP has long resisted their use; for now, there’s no clear timeline on when the force will start using the cameras.

Correction: A previous version of this story stated the incident with Mr. Manuel happened the day of the anti-racism protest in Yellowknife. In fact, it happened the day after, on Wednesday, June 10.