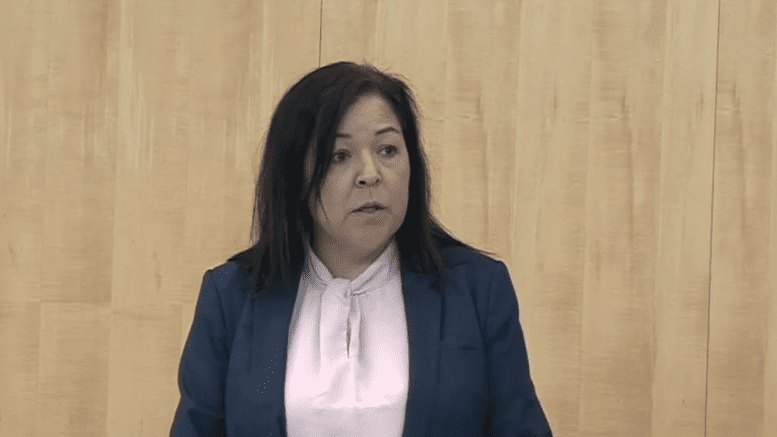 Diane Thom, minister of Health and Social Services, said on Wednesday that border changes starting May 29 now allowed tourists into the NWT if they self-isolate for 14 days. (CKLB file photo.)

You’d be forgiven to think non-residents (other than essential workers) weren’t allowed to enter the NWT.

However, now the Government of the Northwest Territories is saying that isn’t the case.

The statement went on to explain changes to border security that started nearly two weeks ago, on May 29. This was the first the territorial government shared these changes publicly.

Before May 29, border officers asked non-residents to turn around if they didn’t meet one of the exemptions. Now, travellers can turn around voluntarily. If they decide to stay in the NWT, then they have to get an “exceptional circumstances exemption” and self-isolate for 14 days in one of the regional centres.

The statement says the change “reflects an effort to more closely align implementation of the order with the mobility provisions of the Canadian Charter of Rights and Freedoms.”

Community leaders and MLAs have been discussing proper border security enforcement for months.

Earlier this week, residents may have been confused by contradicting statements from the premier and Thom.

On Monday, Premier Cochrane told a CBC national broadcast that tourists were welcome to the NWT if they self-isolated for 14 days.

This was news to many, again considering the government did not inform residents about the changes at the border outlined above.

On Tuesday, Thom said the opposite: “Leisure travel in the Northwest Territories is still prohibited.”

“We have come to the realization that the border restrictions we had in place were restrictive and possibly in contravention with the Canadian Charter of Rights and Freedoms as it relates to mobility,” reads this week’s joint statement.

It clarified further that leisure travel within the territory is now restricted and not prohibited.

In talking about the change at the Legislative Assembly on Wednesday, Thom said the GNWT was watching a court case unfold in Newfoundland and Labrador. The Canadian Civil Liberties Association (CCLA) launched a court challenge against a bill that would prevent travellers into the province — essentially the same thing as the public health order in the NWT.

In April, the CCLA sent a letter to Caroline Wawzonek, minister of Justice, saying the public health orders were too broad. The GNWT amended the orders following the letter.

What took so long?

Had the premier and her minister not made these contradictory statements, it’s unknown whether the public would ever have been made aware of these changes.

Julie Green, MLA for Yellowknife Centre, questioned Thom on why it took nearly two weeks to make the changes public.

The minister’s answers did not clarify. If anything, they created more confusion when the minister said border agents stopped turning non-residents away on May 27, not May 29. According to cabinet communications, the minister misspoke when saying May 27.

“May 29th is the right date,” a spokesperson told CKLB.

“There are real things at stake in telling people that the border is closed,” said Green. “People looking forward to family visits and in some cases family reunification have been waiting for a relaxation of restrictions.”

With the second phase of the Emerging Wisely plan looming — health officials have said it could kick in as soon as this Friday — more changes to travel are to come. According to the joint statement, officials will make those changes clear and “thoroughly explained” to residents.

Town of Inuvik takes action for potential impacts of COVID-19

Be the first to comment on "Amid confusion, GNWT changes tune on non-resident travel"