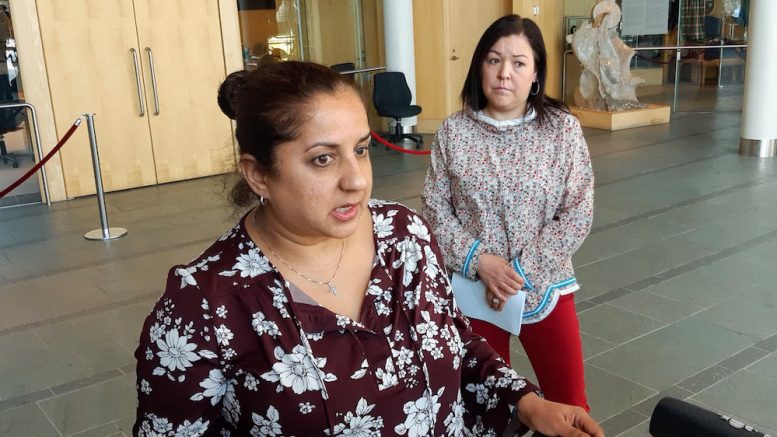 Friday, May 15 is the crucial day to see whether the public health orders in the NWT will begin to relax.

If there are still no active cases by then, it would mark two incubation periods, or 28 days, since the last confirmed case recovered.

According to the territorial government’s Emerging Wisely plan, by that time all tests related to the last recovered case would be returned and confirm there is no community spread in the territory.

The plan outlines three “relaxing phases” before a final lifting of the remaining public health measures. If all goes according to plan, the first phase could begin as early as Friday.

Having a few guests over

At that time, residents could have up to five guests in their homes, to a maximum of 10 people in a household.

The plan recommends keeping to a small group of the same people and maintaining social distancing while they are visiting. It also recommends not having any other visitors if you’re expecting an older person or someone with a weakened immune system.

The plan calls for continued social distancing with guests in your home.

During a news conference Tuesday afternoon, Chief Public Health Officer Dr. Kami Kandola said residents should “use your judgement and common sense” in having guests over.

For example, if you have an elderly family member, “The last thing you want to do is expose (them) to activities you’ve done prior,” said Dr. Kandola.

For anyone that already has 10 or more people in their household, they will not be allowed to have guests but can still visit others.

Outdoor get-togethers will be allowed, up to 25 people and kids can enjoy playgrounds again.

Several types of businesses to re-open

Many businesses will be allowed to re-open once again, pending they send in an exposure control plan to the Workers’ Safety and Compensation Commission (WSCC).

These include personal services (like massage therapy and hair salons), to museums, to recycling depots, to gyms (if conducting classes outdoors or doing one-on-one sessions indoors).

Cary Ingram is the chief mining and occupations health and safety inspector for the (WSCC). How quickly businesses open, he said, will depend on the work that needs to be done to meet their exposure mitigation plan requirements. For example, if staff simply need basic protective equipment versus building physical barriers in their establishments.

CKLB had previously asked the territorial government if it would provide businesses with personal protective equipment (PPE) needed to re-open.

“At this point, there has been no decision to supply businesses with PPE,” said a GNWT spokesperson. “NWT businesses and employers do need to be proactive in taking steps to keep their employees and clients safe by completing their required workplace risk assessments, which will assist them in determining what PPE they will require, if any.”

However, during Tuesday’s news conference, Premier Caroline Cochrane said the opposite.

She said the GNWT is deciding whether to “warehouse” some of the medical-grade protective equipment.

“It’s probably going to happen in all honesty,” she said. “It is difficult for people to have access to those suppliers, some of them have never had to access those suppliers before, so it’s logical since we have the connections that we would be a distribution base for that.”

In releasing its plan, the GNWT reversed a previous decision to keep schools closed for the rest of the academic year.

Schools that wish to re-open will be allowed to do so after submitting a re-opening plan to the office of the chief public health officer.

These must include capacity and social distancing measures.

During the news conference, Dr. Kandola said parents should rest assured this is the safest time to re-open school as there’s no evidence of community spread and there are still strict controls at the border. She added the current data shows COVID-19 does not affect children and youth as much as adults.

Dr. Kandola has maintained that having strict border controls is exactly what is allowing for more relaxed measures within the NWT’s borders.

However, that also likely means millions in tourism dollars gone for this summer.

The first phase of the plans allows for tour operators to offer “staycations”, essentially only serving NWT residents, as long as they have “strict client traffic limits, personal protective equipment, and social distancing measures…”

The plan indirectly addresses visitors, non-resident travel. The relaxing phases mainly address internal easing of measures. Residents need to infer that the relaxing of border controls will happen in the last phase of the plan, which is triggered once a vaccine is approved and distributed, or if another treatment is found and can be widely accessed by the majority of the NWT’s population.

Experts estimate a vaccine is still 12 to 18 months away.

CKLB asked Dr. Kandola if that means there will be no visitors for this extent of time.

She said health officials are monitoring the situation in southern Canada, where the overall curve has not yet flattened. She also said if a second wave of COVID-19 hits, it will not be the time to open the border.

Asked how her government will make up for the financial loss, Premier Cochrane said she was speaking to the federal government.

We know there’s going to have to be some economic relief with that and we know it might take some time,” she said. “I know it’s not what they want to hear but supporting local tourism is what we’re trying to promote and looking for a financial package from the federal government.”

On Tuesday, the GNWT extended both the public health emergency and state of emergency for another two weeks.

The plan says public health orders will be “put in place and repealed as necessary” meaning it’s likely the government will be moving back and forth between the relaxing phases.

That means the public health emergency is going to stick around for months still.

The plan goes so far as to say, “Certain measures will require a public health emergency to remain in place until the pandemic is resolved.”


The new testing site will be located at 108 Archibald Street, across from the Folk on the Rocks location.