Łutsël K’é Dene First Nation has been named one of 10 winners of the 2020 Equator Prize.

The United Nations Development Programme (UNDP) announced the winners of the 11th annual Equator Prize to recognize 10 Indigenous communities from across the world.

“Everything we do is to show gratitude to our elders, leaders of past and present generations. A lot of people have contributed to this award and it’s been a decades-long challenge. I am honored that our small community of Łutsël K’é Dene First Nation is to be recognized globally, ” Chief Darryl Marlowe says. 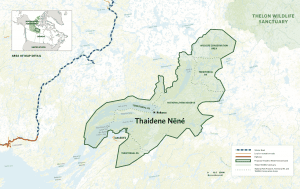 Thaidene Nëné is now a  26,000 square kilometer national park reserve protected between the Canadian boreal forest and the arctic tundra

The Łutsël K’é Dene First Nation has signed a co-management agreement with national and territorial governments to create Thaidene Nëné.

“This land is sacred. We believe it has healing powers and has been keeping our people safe for 100’s of years. In turn, it is our responsibility to maintain the land, water, resources, and wildlife for future generations, ” Chief Darryl Marlowe says.

This is the first time the Equator Prize has been awarded to a group from Canada.

The winners were selected from a pool of 583 nominations from over 120 countries by an independent Technical Advisory Committee of international experts.

The selection was based on community-based approaches that provide an action plan to address our biodiversity crisis.

“As countries move to build back better after the COVID-19 pandemic, these innovative ways to protect ecosystems, biodiversity, and tackle climate change are more important than ever — I expect that the incredible efforts of the Equator Prize winners will have a ripple effect across the world,” UNDP Administrator, Achim Steiner said in a press release.

Equator Prize winners will each receive US$10,000 and the opportunity to join a series of special events associated with the UN General Assembly, the UN Nature Summit, and Global Climate Week.

Łutsël K’é Dene First Nation will be recognized with the Equator Prize winners at a virtual ceremony in September 2020.


The negotiations, which have gone on for over 10 years, officially came to a close on Friday.