Premier Caroline Cochrane says it would be a “sin” for governments to take back social programs that emerged during the COVID-19 pandemic.

The premier went so far as to say, “I am all about universal childcare and guaranteed living wage. I think it is part of the answer. I do not believe the perception that people will just sit back and be lazy.”

Instead she said governments should be proud to introduce these types of programs.

However, any legislation changes to implement these ideas long-term are still far away.

“It would be inappropriate at this time to go looking at changing legislation right now,” said Cochrane, “but it will be something that we need to do in this Assembly.”

“As I meet with our Premiers across Canada, with our Prime Minister, I have already been saying to them things such as, ‘You’ve given the wage increase. You are giving these out to people. How can you ask us to take it back?’” she said. “So I think that that is really important. It is a matter of not only what we do as a government, what the federal government does. I have been working very closely with our three territories on both sides, and we are looking at providing a win-win to the federal government.”

Housing, latest program to be announced

“They may be currently unoccupied for a number of reasons: in the process of being prepared for reallocation, requiring maintenance, minor repair or major repair,” said Revi Lau-a, the housing corporation’s director. “The rest of the units will have varying timeframes for availability based on materials required for repairs and availability of contractors.”

The decision to spruce them up came in March in a $5 million funding package. In a recent news release, the housing corporation said 60 of the units are available in the short-term.

CKLB asked for a regional breakdown of the units.

“It would be too early to indicate exactly how many units are available when and in which communities,” said Lau-a. “The NWTHC will be providing regular updates on the status of making these units available.”

Premier Cochrane may be in support of universal child care but that is not yet what her government has offered during the pandemic. 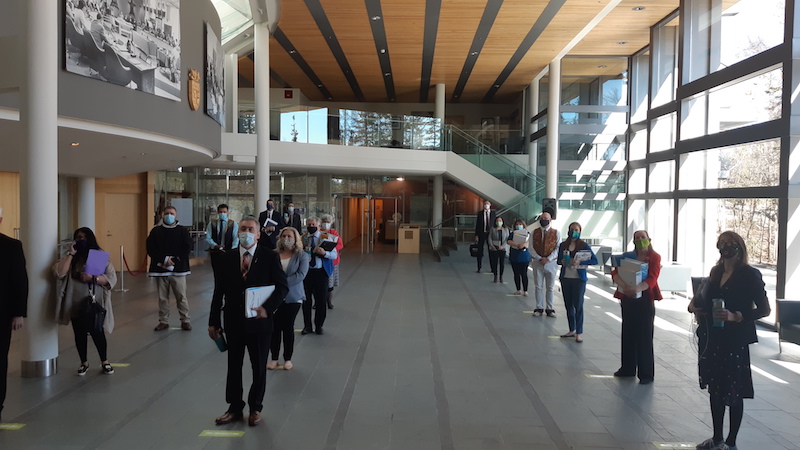 MLAs enter the House in a specific order while maintaining two metres apart. This is one of several risk mitigation measures in place during this session of the Legislative Assembly. (Francis Tessier-Burns/CKLB.)

Last month, the GNWT allocated about $5 million to help ease the financial burden of child care, but only for essential workers. And all that money went to child care providers, not the parents or guardians of the children.

At the time, CKLB reported parents had concerns about the child care subsidy, including the fact they were still paying much more than before the pandemic.

The NWT Disabilities Council introduced a managed alcohol and drug program at the Yellowknife day and sobering centre. The council launched the program independently of the territorial government.

Earlier this month, it published a report on the positive results of the program.

As reported by CBC, “The report says that four people left the quarantine sober, while another 21 were consuming less alcohol and no illegal drugs by the end of the 30 days. Seven participants made housing arrangements with friends or family and four moved into the temporary COVID-19 isolation shelter at the former Arnica Inn.”

To run the program, in April the centre closed to everyone but 30 adults facing homelessness and who were high-risk if they contracted COVID-19. The centre has since re-opened to all clients.

‘Mandate can still be done’

MLAs resumed sitting on May 26, with passing this year’s budget as the first order of business. In that budget, the GNWT proposes $25 million be allocated over four years for its mandate priorities.

That’s roughly how much money the territorial government has spent on responding to COVID-19 so far.

Despite this, “In an initial review on our side, it looks like a lot of the mandate can still be done,” Premier Cochrane told her fellow MLAs.

Cochrane said she considered amending the mandate letters to her ministers in response to the pandemic.

“My first gut was just to add in COVID-19, you’ve got to do it, but then my staff challenged me, and rightfully, and they said, ‘Is life going to be the same after? With this COVID-19 are we going to have the same programs?,” she said. She added the mandate letters to her ministers will be sent to regular MLAs in the near future to be finalized.

Several MLAs noted how quickly the GNWT acted in responding to the pandemic.

“I want us to not lose ground on the progress we have made to date,” said Yellowknife North MLA Rylund Johnson. “It is amazing how quickly our government can pivot on issues when we put our minds to it. I want us to think bigger.”

The finalized mandate letters will be a good first test on how big the government wants to go.

Updated May 28, 10:05 a.m. to reflect the additional information of the housing units.