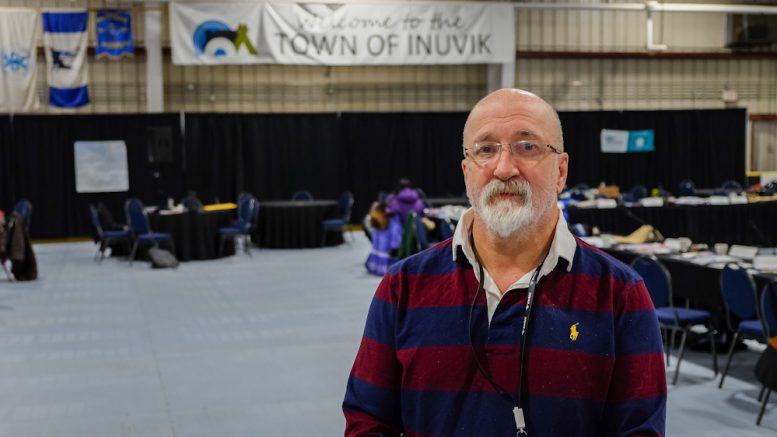 With climate change affecting the ferry near Fort Simpson, Mayor Sean Whelly is calling on the territorial government to consider building a bridge over the Liard River.

Whelly said the river is melting sooner in the year but that breakup is lasting longer, putting residents at risk with uncertain ice conditions.

And when the river does finally break, he says the water levels are much lower in the summer and “drop right off quickly in the fall.”

Fort Simpson passed a resolution late last year calling on the Government of the Northwest Territories to consider a bridge study and to lobby the federal government for money to do so.

Whelly brought up the issue again with cabinet recently during a question and answer session at the NWT Association of Communities’ annual general meeting in Inuvik.

Prior to the session, he told CKLB he hoped to get a firm commitment from cabinet to submit a proposal to the federal government for a bridge study.

That’s not what he got.

She reiterated her government’s commitment to the Mackenzie Valley Highway and said the government estimates the study would cost between $2-$5 million (Whelly expects it to be closer to the $2 million mark).

“My understanding is the bridge is the next step within the Mackenzie Highway,” said Cochrane. “So it’s not forgotten but I can’t commit that we’re going to do it right now until we find out where the money is coming from.”

However, other than mention it to the federal government, the Premier stopped short of indicating what lobbying efforts the GNWT will do to get that money.

Whelly cautioned the government to act sooner rather than later so his community doesn’t become “completely disconnected.”

In speaking with CKLB, Whelly also criticized the GNWT’s approach to building the Mackenzie Valley Highway, calling it “piecemeal.”

“When I got to Fort Simpson 35 years ago, I always thought that we would see that highway within about 20 years,” he said. “Now 35, 40 years later we’re still nowhere near to connecting the communities to a highway up and down the valley. I think we’ve got to seriously put the push on and start filling in some of these planning gaps and commit to really chasing the funding to get this highway done.”

Whelly said he expects the bridge over the Liard River to be a “fair size” but not quite as big as the Deh Cho Bridge—which the GNWT will still be paying for over the next 25 years.

“And there are options the community is aware of, such as going to and island in the middle of the Liard and then across,” he said, “like a two-bridge span, which might take down the costs.”

Another consideration is not having any commercial boat traffic on the Liard, meaning the bridge doesn’t need to be as high.

“These are all things that the study would look at in terms of the needs forecasted and current that may determine the type of bridge that would be best suited.”

Whelly also had the support of another Dehcho community: Fort Liard.

Mayor Hillary Deneron said having a bridge near Fort Simpson would improve travel for her community and others in the area.

“We travel to Fort Simpson year-round because people fly out for medical reasons and tourism,” she said. “I think we’d all benefit from a bridge.”