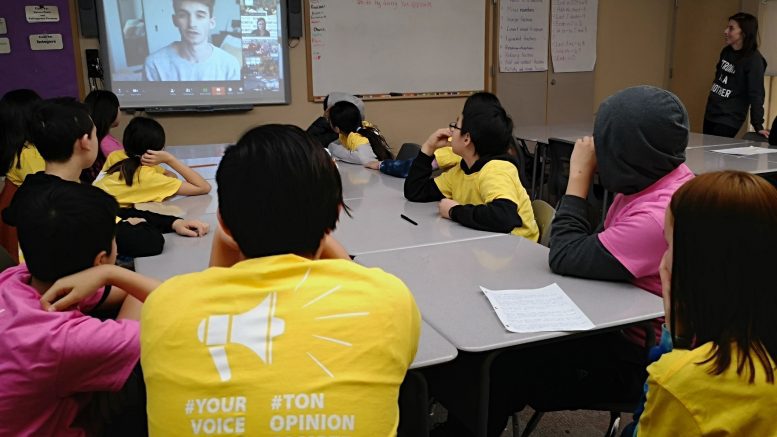 RCMP in Inuvik worked with Grade 8 students from East Three Secondary School last week on mental health issues and how to best deal with them.

According to a news release from the Mounties, students listened last Thursday to a videoconference by YouTube personality and author Joey Kidney on the topic of mental health.

The videoconference was part of RCMPTalks, a National RCMP initiative offered to youth from all over Canada.

Throughout the year, different topics are selected and schools are chosen based on which school would benefit the most from the session, police state.

Thursday’s session was being offered to schools located in the Northwest Territories, Nova Scotia, Alberta, British Columbia, Yukon, and Nunavut.

As part of this initiative, Inuvik RCMP delivered learning activities in the classroom prior to the videoconference.

Then, the students were able to develop social awareness initiatives on the topic of mental health, police stated.

“The students created a three-parts project to better educate themselves and their peers” explains RCMP Const. Nick Mysko, the project coordinator. “The students are planning to have Inuvik RCMP members attending the school to provide a mental health presentation to other classrooms. They are also preparing signs for the school with local contacts on them with whom students can contact if they need help”.

During the presentation, the Inuvik students asked Kidney where he gets his inspiration, to which the guest speaker replied that he draws inspiration from celebrities he knows, such as Canadian superstar Justin Bieber, who himself, according to Kidney, has struggled with mental health issues.

RCMPTalks is one of several initiatives developed by RCMP National Crime Prevention Services, in coordination with RCMP Divisions, that aim to promote youth engagement and empowerment.