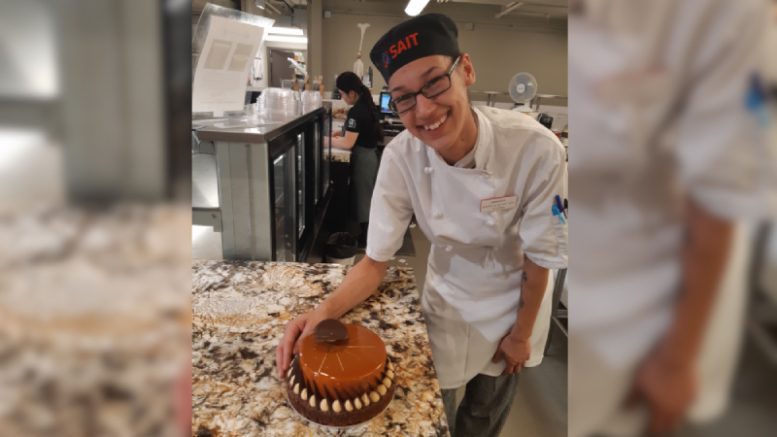 Janessa Elanik with one of her creations at the Southern Alberta Institute of Technology. (Photo courtesy of Elanik).

Janessa Elanik is humble when asked why she thinks she’s a leader in her community.

“There’s not a lot of people in my family or in the communities up north who really pursue what they want to do, or their passions,” she says. “Going out and doing that, and being on my own is a step towards leadership, if not quite a leader yet.”

The 24-year-old recently won the Inuit Circumpolar Council’s inaugural Hans-Pavia Rosing award. According to the council, the award highlights “good leaders and guiding stars” in Inuit communities around the circumpolar North.

Elanik is originally from Yellowknife and is now studying baking at Calgary’s Southern Alberta Institute of Technology.

Elanik was inspired by her time at Sir John Franklin High School where she had the chance to kneed her first dough.

“When I was doing that at school, I fell in love with it,” she says.

“It didn’t really go well at first, I didn’t get accepted to school the first couple of times I applied, so I went into business instead” she says.

One day she hopes to merge the two and open a bakery in Yellowknife. But she says that’s still a few years off; she wants to earn her Red Seal and get a few years’ experience in the oven first.

For now, she’s putting the $1,000 dollars US she won as part of the award towards finishing her schooling in April.

CKLB asked if it has been hard to pursue her passion so far from home.

“At times, but I’ve had a lot of support from family and friends, and my chefs at school,” she says. “It’s nothing I can’t handle.”

Below are some of Elanik’s edible creations.

I luv bread so much 💕 these rye sourdoughs turned out so nice!! #bakingandpastryarts#breadporn#yyceats#sourdough#rye#saitbpa