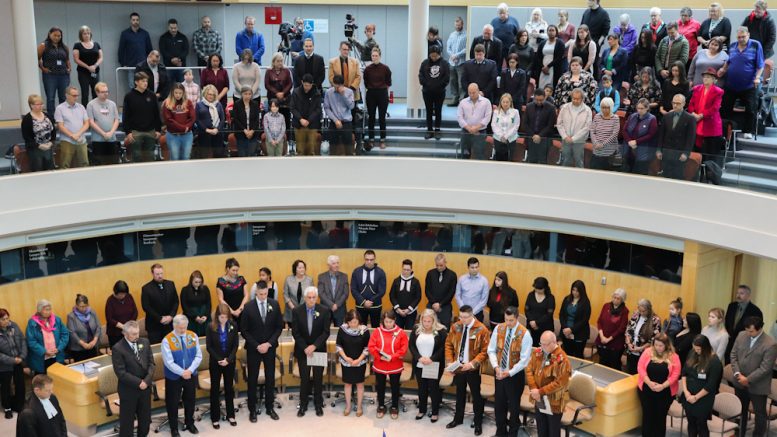 Hundreds were gathered for the swearing in of the members of the 19th Legislative Assembly of the Northwest Territories. (Francis Tessier-Burns/CKLB).

The Clerk of the Legislative Assembly said it had been years since he had seen so many people in the public gallery.

Hundreds of friends and family members were gathered for the swearing in of the new MLAs on Friday, October 11.

Following the brief ceremony, the newly-sworn-in MLAs were ready to get down to business. CKLB spoke to nearly a dozen members and the vast majority—especially newcomers—were eager to start the work of the 19th Legislative Assembly.

They added that they were looking forward to approaching a new way of governing, especially with having so many women elected—the NWT went from being the jurisdiction with the lowest representation of women to the highest in Canada.

Paulie Chinna, the new MLA for Sahtú, said having more women at the table will mean “a different dynamic and a different way of thinking.”

R.J. Simpson, MLA for Hay River North and one of only seven returning members, said the orientation has been done differently. When he was first elected in 2015, the veteran members and newcomers were separated. This time around, all members are taking part in orientation.

“There’s definitely a different vibe now,” said Simpson. He added that the “new crew” is much younger than their predecessors and “there’s obviously a lot more women.”

Asked about how he thought that would change the working of governments, he gave the example of committees reviewing legislation.

“We would comment on whatever was in front of us and each of us brought something to the table, we had different expertise but there was always a voice missing and that was a woman’s voice. Women have different life experiences, they have different perspectives and … it was definitely lacking last time.”

For Lesa Semmler of Inuvik Twin Lakes, the diverse background of all members is really what she thinks will make this government different, not just the number of women.

CKLB asked if she thought having so many different viewpoints may make it difficult to move ahead as a government.

“If we can continue to communicate then we should be able to work through a lot of the differences and continue as a consensus government,” she said.

“The voters have spoken,” he said, “they wanted to see a different group of people in here… As long as we have a good premier and cabinet steering the ship, I think we’ll do just fine in this assembly.”

With Caroline Cochrane as the sole returning cabinet member from the 18th Legislative Assembly, it’s essentially guaranteed some first-time MLAs will be getting a cabinet role.

So far, three of the four people who have put their name in to become Premier are returning members, and include Cochrane, R.J. Simpson and former speaker Jackson Lafferty. Rookie Thebacha MLA Frieda Martselos is the fourth to say she’s interested in the position. 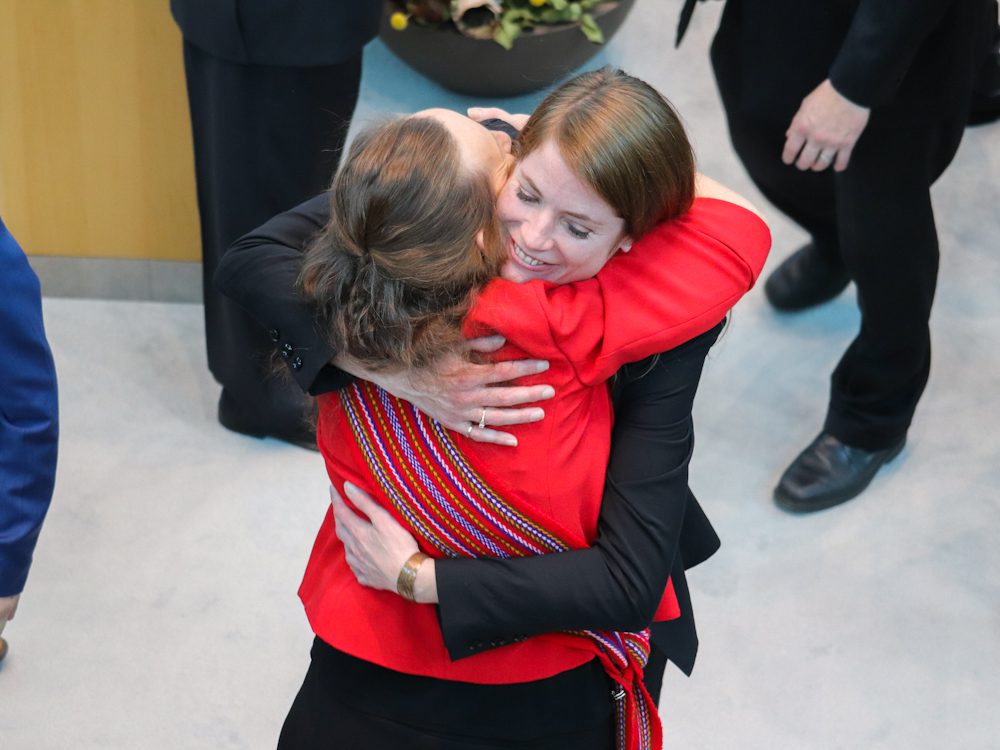 Caroline Cochrane and Katrina Nokleby embrace following the ceremony. They are two of nine women elected to the 19th Legislative Assembly. (Francis Tessier-Burns/CKLB).

Semmler confirmed to CKLB that she is looking to serve as a cabinet member, but didn’t specify which department she’d like to take on. Jackie Jacobson from Nunakput said the same thing.

On the flip side, both Chinna and Norn said they will serve as regular members in their first terms.

“We have some issues that require a lot of attention,” said Chinna before listing off a series of priorities for the Sahtú, including the education facility in Deliné, the Tulita bridge and self-government in Fort Good Hope, among others.

Norn said he consulted with elders when he was door knocking and they told him that he should take the time to settle in and understand the inner workings of government before seeking a cabinet post.

“They told me to start out as a regular member, ‘You’ll probably serve your people better by doing that’,” he said, and added that his focus would be on settling the Akaitcho and Deh Cho land claims.

The MLAs will soon be getting what they wish for as the first session of the new government will be on October 25.

Before then, there will be a public meeting with Indigenous leaders at the Tree of Peace Friendship Centre in Yellowknife on October 17.

Should vaccines be mandatory for GNWT employees?