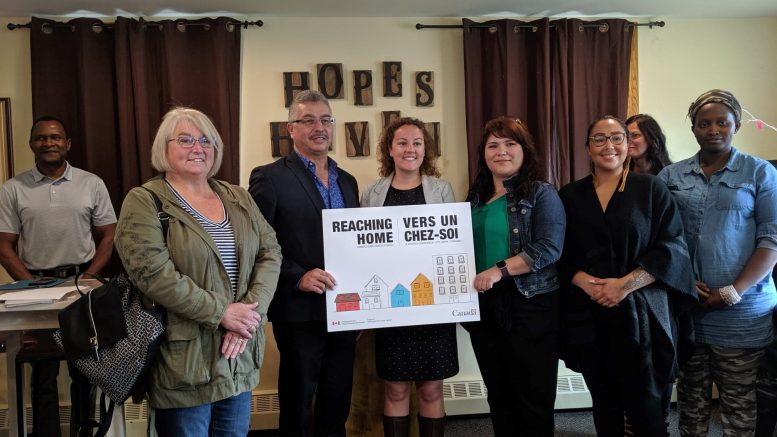 The Federal Government is committing more than $6 million over five years to fight homelessness in Yellowknife.

It’s a transitional home for teens and young adults in Yellowknife who might otherwise have no home.

The money comes under the fed’s new homelessness strategy called “Reaching Home” and will be made available to groups including Indigenous organizations that apply and qualify for funding.

Through Reaching Home the Government of Canada has created what it calls a new Territorial Homelessness stream to increase federal homelessness strategies in all three capital cities in the three Northern territories.

The announcement is one of a slew of funding pledges McLeod has made this month ahead of the October federal election.

The City of Yellowknife is currently in the second year of a ten-year strategy to end homelessness in the city.

Mayor Rebecca Alty, who was also at the funding announcement, says that at last count there were still more than 300 homeless people in Yellowknife.

She says the funding will help keep the city’s research of the homeless population up to date and assist its current anti-homelessness partners including Side Door Ministries which operates Hopes Haven, the Yellowknife Women’s Society which runs Housing First and the YWCA.

Also on hand was for the announcement was City Councillor Stacie Smith who is also the Chair of the Community Advisory Board on Homelessness.

“Today’s announcement will positively impact the most vulnerable members of our community.  By working together, the City Of Yellowknife Community Advisory Board on Homelessness and the Government of Canada step closer to reducing homelessness in Yellowknife,” Smith said. “Reaching Home will support the development of the Council adopted strategy “Everyone Is Home” – Yellowknife’s ten year plan to end homelessness and ultimately address this pressing social issue.”

McLeod and Alty agree it’s much easier to address problems like mental health, addictions and domestic violence if the person being treated has a roof over their head.

The city’s anti-homelessness initiatives include Housing First, which has seen homeless people housed in various apartment units throughout the city.

There is also a project reportedly in the works by the Yellowknife Women’s Society to turn the Arnica Inn on Franklin Avenue at the base of the hill to Old Town into a transitional apartment units.