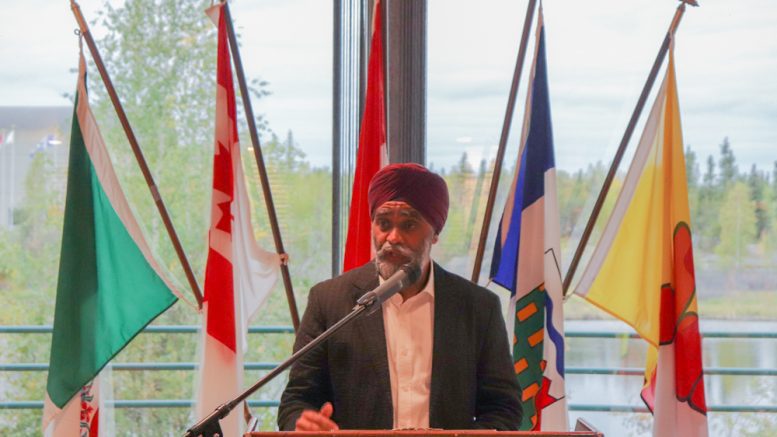 Minister of National Defence Harjit S. Sajjan made the announcement at the headquarters of Joint Task Force North in Yellowknife on Wednesday. (Francis Tessier-Burns/CKLB).

The federal government is investing in its “gateway to the North” says Minister of National Defence Harjit S. Sajjan.

Sajjan was in Yellowknife on Wednesday to announce $150 million in funding over five years to extend the runway at Inuvik’s Mike Zubko Airport by more than 900 meters. The money will also go towards improving the lighting, navigation and landing systems for military aircrafts.

Sajjan said the extended runway will allow for more “flexibility” with larger aircrafts being able to deploy from the airport with the “right support supplies.”

“This is about making sure that we support our communities to the North while we send a very strong message to other nations that Canada takes its sovereignty very seriously,” said Sajjan in an interview with CKLB.

When asked if there were any specific threats the military was monitoring, the minister pointed to Russia saying the country has been “demonstrating a little bit more up North,” and added, “with recent activities we have seen, our investments have been very timely.”

Sajjan couldn’t say if that also meant more personnel would be coming to the North. CKLB asked if the government was catching up and if these investments should have been made sooner.

“To be honest, yes,” said Sajjan. He added that the Liberal government “is not just looking at sovereignty from a military perspective, it’s about supporting the communities that live up here.”

Asked about the military’s relationship with Indigenous people in the north, Sajjan said the Canadian Armed Forces takes this “extremely seriously.”

“We want to make sure that if there’s ever a need to respond to any type of domestic response in Canada, that we’ll be there,” he said.

MP Michael McLeod also said the improvements at the airport would help with search and rescue missions. He also touted the economic spin-offs from the construction project.

The construction of the extended runway and other changes is expected to be finished in 2026.

Sunrise Festival in Inuvik goes online to celebrate the light


“I think the [community] is excited for the vaccine to come along, so we can come together again,” says Challis.