The remnants of the houseboat the caught fire on Yellowknife Bay early Wednesday morning. (Francis Tessier-Burns/CKLB).

A houseboat on Yellowknife Bay now lays in ash after an early-morning fire on Wednesday.

According to RCMP, the fire began shortly after 3 a.m. and was “out of control” by the time officers and city firefighters reached the area. Two residents left the house safely with one being brought to hospital to treat smoke inhalation.

The Fire Marshal is investigating but the fire isn’t considered suspicious. 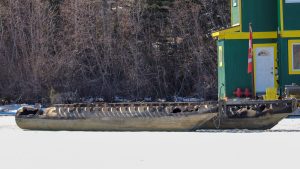 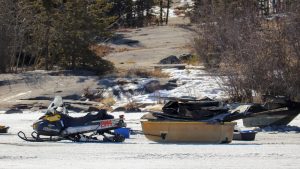 Out of control wildfire burning about 45 kilometres from Yellowknife