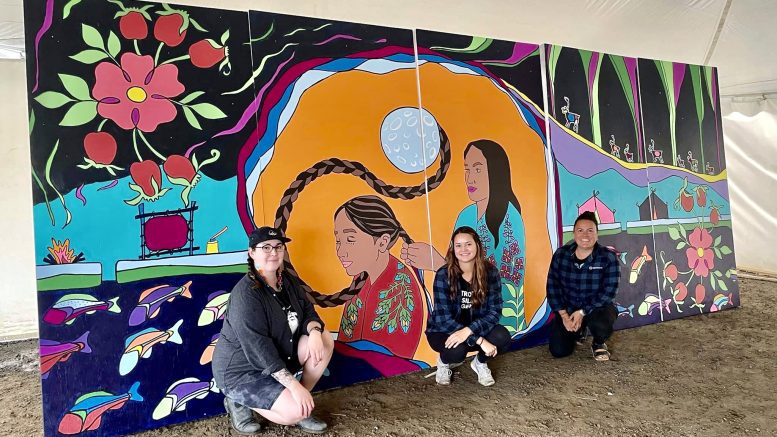 Vibrant new murals are popping up all over town that give a fresh perspective on community, culture and identity in Yellowknife, Ndilo and Dettah.

Reshaping Indigenous representation is the focal point of each mural.

Last week, the organization unveiled its first mural on Angel (51st) Street in Yellowknife and residents were thrilled to see it.

Kyla LeSage is a 24-year-old artist living in Yellowknife, who contributed the concept to the strong, healthy women mural.

“I could not say no to this opportunity,” she says.

The imagery in the mural stands “to really reclaim the kind of roles that women play in the community and how that has been impacted by colonialism.”

The image of a mother-daughter pair was modelled by a volunteer and LeSage wanted to highlight the significance of this practice.

“Within women’s hair and within braiding, it’s connecting us to the land and our ancestors and the moon and the sun and everything around us.”

The mural is rich in symbolism; it has fish, caribou, hide tanning, braiding and rose hips. Centering the themes of “healing and strength that comes from the land and from our women.”

Most importantly, the mural acts as a mirror so that women can see themselves in it, be empowered and hold space.

Not only is LeSage proud of her contributions to the project but who she has become in the process.

“It helped me embrace my journey as an Indigenous woman and how I’m finally returning to my culture … I’m finally living my Indigenous bush dream and reclaiming these practices for other women,” she adds.

LeSage sees her grandmother in the mural, who was a residential school survivor.

She remembers being called her “warrior granddaughter,” always advocating for others.

The mural complements the significance of Angel Street as it was named to honour domestic violence victims in the community.

The murals were put together in the summer by a team of roughly 50 people.

LeSage worked along with Lianne Charlie and Melanie Jewell in the curation of this piece. They served as her mentors.

Charlie was the lead artist on the project and she’s been working on similar murals in Whitehorse for five years.

She remembers how difficult it was trying to connect with the other artists from her basement, virtually.

“There was lots of anxiety, fear, and disconnect.”

She says she also experienced an intense re-connection to self and community through this collaborative process.

“When I look at the image of the mural, I think a lot about its making, and how it was (enacting) the values that are also captured in the image – one of care, love of sharing of joy and celebration of each other.”

“Imagine what that would look like as we build our nations,” she adds.

Mahalia Yakeleya Newmark is one of the co-founders of the organization and has worked on this project throughout her entire maternity leave, but attributes the success of this initiative to her community.

“We’ve had lots of support and I just really want to express that gratitude,” she says.

She hopes to secure more funding in the future to host more art projects.

All six murals will be released by the end of the month.