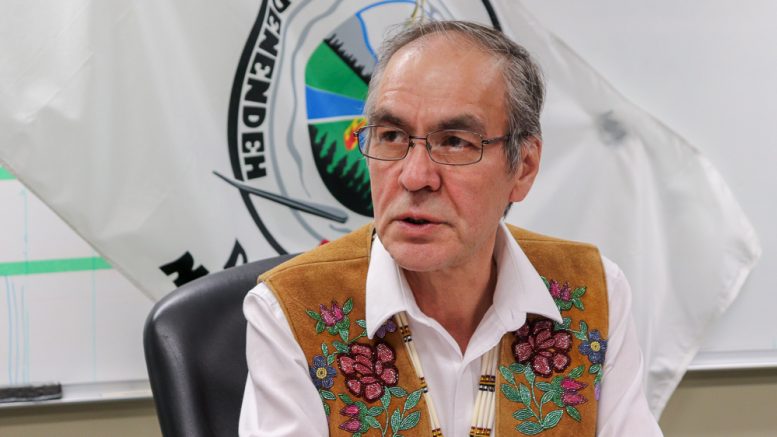 Dene National Chief Norman Yakeleya says the federal government’s priority after the election should be “rebuilding” Canada in the wake of COVID-19 with the help of Indigenous people.

“The Dene people have always had the high value of sharing our work, sharing whatever we have to make a better future for ourselves in our small communities, and for improving the quality of life in our homes, in our communities, and we want to rebuild with this government,” he told media on Tuesday morning.

Yakeleya joked about having an election “hangover” after keeping an eye on results late into the evening.

Liberal candidate Michael McLeod waited until shortly after midnight to claim victory in a tight race with NDP candidate Kelvin Kotchilea. Elections Canada shows McLeod received 4,979 votes (about 38 per cent) to Kotchilea’s 4,301 (about 33 per cent). CBC has reported about 1,300 residents requested mail-in ballots. Those still need to be counted.

Yakeleya recognized McLeod’s advocacy for Indigenous people in Ottawa and having brought in funding for infrastructure and housing to the territory.

Nationally, Yakeleya called on the federal government to advance and Indigenous-led path to rebuilding.

Yakeleya said calling an election at this time of year shows the federal government doesn’t “understand who we are as Indigenous people.”

Many are out on the land hunting to provide for their families.

“The moose and caribou don’t wait until the election is over,” he said.

Many small communities are still reeling from or in the midst of a COVID-19 outbreak. Public health orders also prevented some residents from casting a ballot yesterday.

“Timing was not very good,” said Yakeleya. “It’s a numbers game… however, it’s done, it’s finished. The result is that the same old, same old it means that we don’t know when the next election would be called.”

Elections Canada shows only 13,143 people voted of the 30,182 registered electors, giving a turnout of about 44 per cent. Nationally, voter turnout is about 59 per cent.

At McLeod’s viewing headquarters, he joked supporters may have been overconfident and gone hunting rather than cast a ballot.

He also addressed the low turnout in his victory speech, saying COVID-19 restrictions and fear of going out in public led to voter apathy.

With files from Mariah Caruso.