The Yellowknives Dene First Nation (YKDFN) is scheduled to host its election for chief and council on Aug. 23.

CKLB spoke with the candidates to discuss their platform and vision for the future.

The transcription has been edited for clarity. 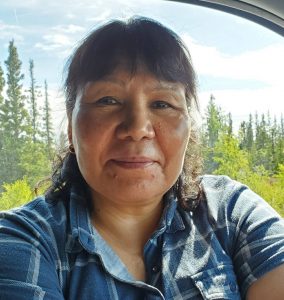 Why are you running for the position of chief?

The reason why I’m running for Ndilo chief is that I’m hearing a lot of concerns from our community members, that they’re not informed of the current negotiations – and that they’re not ready for ratification.

I wanted to let YKDFN members know that I will keep them informed of all of the council activities, meetings and hold workshops on the negotiations, constitution, governance and our membership election codes.

We need the memberships to be involved in order to get a mandate to go forward.

I feel like I’m qualified for the position. I had served two terms on the YKDFN council, I have two diplomas in management studies and social work. I’ve been involved in the implementation of all of the impact benefit agreements with Bhp Diavik, De Beers. I have Board Governance experience serving on numerous boards, like the occasional Business Development Corporation, the Native Woman’s Society of the NWT and the Yellowknife Health and Social Service Authority Board.

I feel like I have a lot to offer.

What do you believe is the biggest issue facing your community?

The biggest issues are the outstanding claims and the giant mine remediation.

Membership or not being kept informed or involved. We had a problem involving the membership during COVID. There were other ways that we could have communicated with them through virtual meetings. And if we need to continue to do that, then that’s the way to go. But they need to be involved in what Council is doing in terms of their rights and what they feel is important for them.

What would you do to address those issue(s) if you are elected chief?

One of the ways that id like to do that is to hold virtual meetings and workshops. For those out of town, we can set up a system so that they are involved virtually. That is the number one concern is that they’re not informed and that they’re not involved. So that’s something I’d like to address. 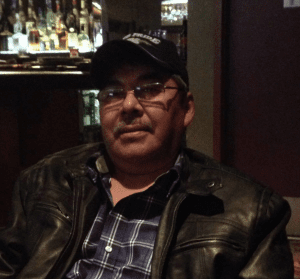 Why are you running for the position of chief?

I’ve had numerous positions and leadership over the years, I feel that today is the time to move forward with (our) action plan with Canada.

Many things are happening in Canada, which really affects the Indigenous people here in the north, especially the UN Declaration that’s gone through Parliament in Ottawa.

I truly believe that we need to grab that and take action on that and make sure governments are following through with the implementation of it. So that Indigenous people can have self-determination.

I think it’s important for our community to really look at what’s going on in Canada, as well as what goes on in our back door.

As a first nation, we don’t have an economic base. Absolutely none.

We need to build our economic base here within the city of Yellowknife.

What do you believe is the biggest issue facing your community right now?

The city has to work with Indigenous people.

We don’t send money home, we spend all our money here, we support the economic curse of the NWT.

I think it’s time for the business sectors in Yellowknife to look at Indigenous people here and say, okay, they’re contributing a lot of money, we should hire their people, we should really work closely with them. I think that’s the way to go.

One of the important things is the land claim settlement.

I think the Yellowknives Dene needs a big push with an experienced leader, a wise elder who can push the envelope and make things happen. It’s not about picking up a paycheck and going home. It’s about building dreams for the future and building things for the community.

We want self-determination, get the land claim settled, and move on with our future.

What would you do to address those issues if you’re elected chief?

I think the young leadership needs a really good orientation of the past history.

Elders used to tell me if you know the land, well, you travel the land, you’ve travelled to people, you know, a lot of stories. If you haven’t been on it, you have no story at all, you have nothing to tell.

I build on the history, culture and also in leadership but as well, I work on land claims for many years. I truly believe I have the skills. I can make things happen.

I’ve done it before I can do it again. 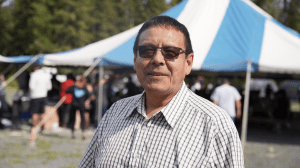 Why are you re-running for the position of chief?

I’m asking my people to give me the opportunity to seek another term.

I have still a lot of fight in me and I have a lot of energy.

I want to continue with everything going and carry forward.

What do you believe is the biggest issue(s) facing your community?

Our negotiations have not been completed yet.

What I’m going to suggest to the people is that before we sign the agreement in principle (AIP), all three First Nations like YKDFN, Łútsël K’é, and Deninu Kųę́, must meet internally, with chief counsel and elders, to discuss any items.

We have three big items that we want to discuss before signing the AIP; capital transfer,  governance, and land quantum.

What would you do to address those issue(s) if you are re-elected chief?

Meeting with all three First Nations is important.

The other items, that are very important are the Giant Mine remediation, the apology and compensation so that we would start healing and work towards reconciliation.

Candidate Cecile Beaulieu has chosen not to speak to CKLB.