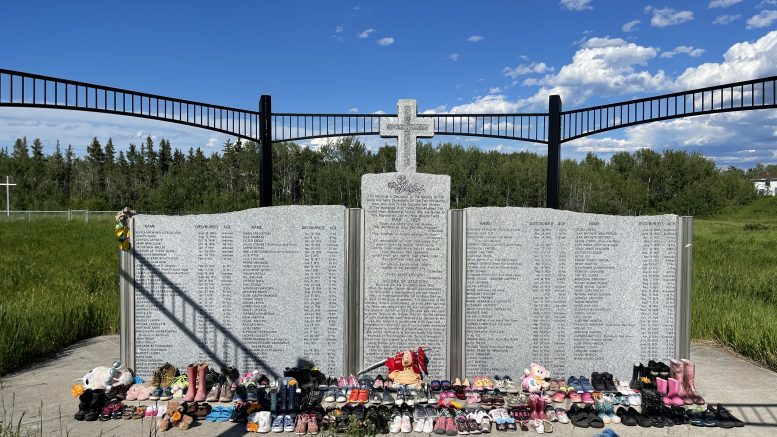 The monument to victims of residential schools in Fort Providence. (Photo by Mariah Caruso/ CKLB.)

Deh Gáh Got’îê First Nation Chief Joachim Bonnetrouge says his community is planning to search for unmarked graves near the site of a former residential school.

Chief Bonnetrouge confirmed the search will happen in the coming months, but few details have been established yet. He said other community’s have been asking Fort Providence whether it will be conducting a search.

But he added the community’s wellness needs to be the priority before the searching begins.

“It’s sensitive too, because families are still wondering,” Chief Bonnetrouge said. “There’s the healing and recovery part… That work has to be done internally.”

As for what needs to happen next, Chief Bonnetrouge said a local group will be established to lead the search.

He said some former students, now Elders in the community, have offered to show them the area where the deceased are believed to be buried.

Chief Bonnetrouge said according to survivors and local research, the number of those reported to have passed away at the residential school — 40 students according to the National Centre for Truth and Reconciliation (NTCR) — is far smaller than the reality.

He says the community’s leadership is looking into applying for funding as the search would involve ground-penetrating radar technology.

Sacred Heart residential school was open in Fort Providence from 1906 to 1960, according to the NTCR.


Nearly $683,000 to Fort Providence-based Gonezu Energy, which will use the money to train and deploy up to a dozen energy advisors across the NWT.