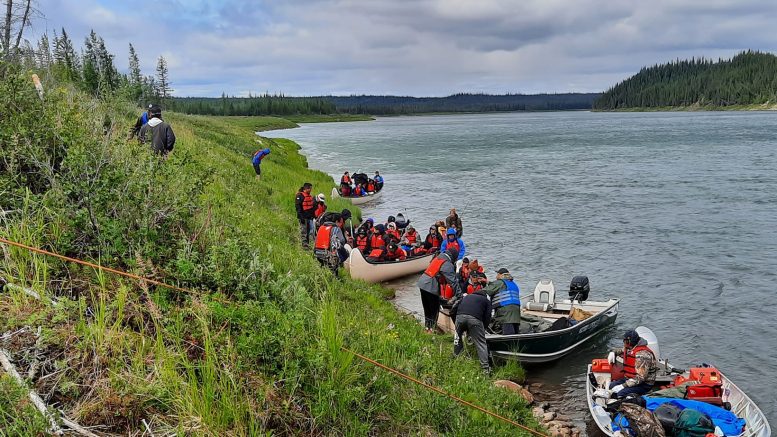 The arrival of 44 paddlers from Délı̨nę was the highlight of Tulita’s Treaty 11 commemoration.

The group was spread across four canoes.

The majority were youth, some who had never paddled before. They’re first experience was an overnight trip down Bear River.

On Thursday evening, hundreds of Tulita residents stood along the shore of the Mackenzie River as the paddlers arrived.

Charlotte Taneton was one of the youth on the trip. She said seeing the community’s welcome was exactly the final push the paddlers needed to make the last stretch.

Then the commemoration took off.

Paul Andrew added that the Elders that signed the treaty 100 years ago had future generations in mind.

“They did it for the little ones we see running here today,” he said.

Délı̨nę Chief Leeroy Andre and Sahtu Grand Chief Wilbert Kochon were both on the canoe trip. When they arrived, each Sahtu chief was gifted an embroidered hide jacket.

The rest of the evening featured traditional games like leg wrestling and stick pull, as wells as skilled events like fastest log sawing and nail pounding. But the games are just beginning.

A three-day hand games tournament kicks off today with teams coming across Denendeh to compete for the thirty thousand dollar first prize.