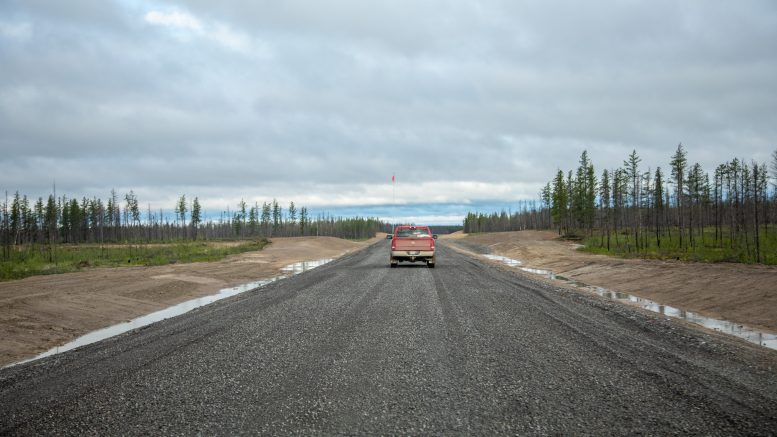 A finished section of the Tłı̨chǫ Highway that will lead to Whatì. (Photo courtesy of the GNWT.)

CKLB reached out to each candidate for chief in the four Tłı̨chǫ communities.

The same three questions were asked to each candidate and here is what they had to say. Q: Tell me Chief Nitsiza, why are you running for re-election?

A: I have been chief for 12 years now. And I did a lot of work, and there is more work that needs to be done. So that’s why I decided to run again. I’ve been asked by others to run, they want to see the continuity in the leadership. Especially at this time, there’s a lot of stuff going on.

Q: And tell me, Chief Nitsiza, what is the biggest issue facing Whatì right now?

There’s a lot of issues, the main issue now is the the concern about the all-season road that’s coming to the community in this fall. The concern is that there’ll be an influx of people and more flow of drugs and alcohol and all the other stuff that goes with it.

That is one of the concerns, but we are working, trying to mitigate the impact, the social impact. So there’s other issues, housing and everything else in the North. Housing is one of the biggest issues the Tłı̨chǫ government has been working on as well. So in the community, as the chief, we just don’t really speak for one community, you speak for all four communities.

Q: And so with the all-season road, the possibility of drugs and alcohol coming in, what is your plan to ensure that doesn’t happen?

A: We had prohibition in the community, a dry community for many, many years, going back to the 1970’s. And I know for a fact that it does not work. Goes back to Al Capone days.

You know, the only people that do well, is the bootlegger. And now we have more drugs coming into the community, even a small community like mine.

So there’s a lot of problems there, but we can just shut down everything, it’ll eventually boil over. And that’s what’s happening. The only way we can deal with these social issues is through education, at home and at school. And so, at the Tłı̨chǫ government level, we have put in a lot of money to try to deal with the drug and alcohol issue.

For too long, we have been relying on other institutions, other governments to try to fix our problems. And that’s the reason why we have set up the self-government agreement, trying to do things for ourselves.

And so we know that the territorial government is always broke, and they never have enough money to do any housing or any other programs. So we have come up with the idea of that we want to do it ourselves. And I mean putting money in it ourselves, hire our own people and that has to come from within the communities.

We have to have everybody take part in the program, Elders who want to do it from the Tłı̨chǫ perspective. So that is already in the work. Right after the election, there’s a program we’re already identifying. We’re having a on-the-land program, there was much talk about. Setting up in the communities and using the Elders to run the program.

We already have our senior staff and are working closely with TCSA to try to come up with a plan, strategic plan, how we’re going do it. So the work is being worked on right now. 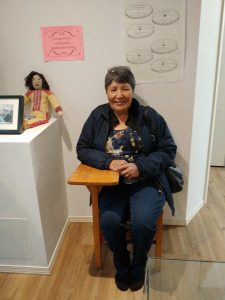 Q: So tell me why you decided to run for chief?

A: I decided to run for chief because I believe that there was some concerns among the community members regarding our agreement. I believe that they’re not being updated, of the changes. One of the other things that they were concerned about, the agreement. The Elders have said is it’s not really been followed.

Q: So my second question is, what do you think is the most pressing issue facing the community of Whatì right now?

A: Hearing the community members want changes, they want to be informed with any decision that’s made on their behalf. We’re going to have the road that’s going to be open in five months.

But the decision that is made for them, they’re not updated. I guess that’s where transparency is lacking. So that’s the reason why they they want change in the community. The lack of respect or trust, or keeping the community up to date.

But also my own opinion is that when we did our Tłı̨chǫ agreement, we want to govern ourselves, collectively together, to make the choices. Not choices that were made for us by the GNWT and federal government. We’re trying to move from that and that’s not what’s happening.

Q: My final question for you is, how do you plan to change that?

A: I had made it clear, when we had a meeting with the public, that I will work with them and by them. They will be keeping me up to date on what they want me to deliver at the Tłı̨chǫ government level.

And there is some stuff that will be be coming forward. But there are certain things that we need to change, to work with them, and for them to make sure that there are changes at that level too.

Because I know that we’re going to have the road pretty soon. There are certain things that we need to kind of protect, Lac La Martre and our Trails of Our Ancestors. All these things are something that the Elders had made sure that we protected. With the road, we’re going to have a lot of visitors and to make sure that they don’t go on to doing things without us knowing about it.

That was the whole idea of settling the land claim together, was to make sure that anything that’s happening on our Tłı̨chǫ land, we would be involved. So I will make sure that I keep my Tłı̨chǫ people here — not just Tłı̨chǫ people, but the members of this community — informed with things.

And I will be making sure that they know what is happening and why it’s happening. And alone, I will not decide to do things without them knowing about it. Because I’m here for the people. I’m a public worker. And that’s how I think with all the years that I have worked as a public worker for them, they need to be represented. Because not every individual will have the same issues. And not every individual will have the kind of services that they need. Everybody has a special way of being dealt with.

CKLB reached out to Joseph Moosenose, but was unable to arrange interview in time for publication.

Tłı̨chǫ community elections: what Gamètì’s chief candidates will do if elected