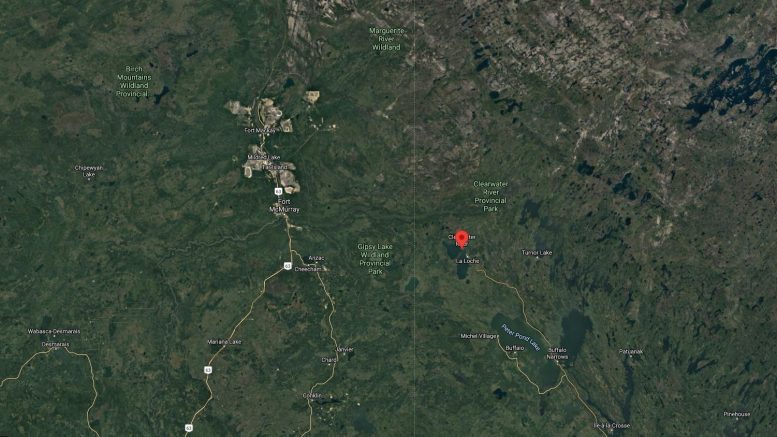 Clearwater River Dene Nation is on the shores of Lac La Loche in northern Saskatchewan, about 120 kilometres west of Fort McMurray. (Image retrieved from Google Maps)

The Clearwater River Dene Nation (CRDN) has put up a “security checkpoint” on the highway running through the community — the only road access to uranium mines in northern Saskatchewan.

The community says the checkpoint is in response to “the absence of any meaningful consultation” by the provincial government when granting uranium exploration licences.

Last year, CRDN also went through one of the largest outbreaks of COVID-19 of any Indigenous community in the country. Leaders say this is another reason they put up the checkpoint.

“Allowing uranium exploration and development work to proceed on a business-as-usual basis at this time places CRDN community members’ health and well-being at risk,” reads a news release.

“The Government of Saskatchewan ran roughshod over the rights of the Dene People in this region for decades,” said Chief Teddy Clark in the release.

The community is also concerned about how ongoing exploration activity “will impact moose, caribou and migratory bird nesting areas at this important time of the year when the young are being born.”

It’s unclear whether CRDN is turning away workers when they reach the checkpoint. CKLB reached out to the chief for additional details but did not hear back in time for publication.

In an emailed response, the Government of Saskatchewan’s Ministry of Environment said it was “committed to fulfilling its duty to consult.”

However, it says the pandemic “created challenges for both consultation and ongoing operations, with some activities needing to be adapted or curtailed entirely.”

As for the risk of COVID-19, it said any permitted activity must respect public health guidelines.

“Exploration permits issued by the ministry include a specific condition that requires companies to report caribou sightings and to allow the caribou to pass undisturbed,” reads the response. The ministry said “This condition means that a caribou sighting will essentially halt work until the animals have passed beyond the work area. In addition, companies generally commit to do their work outside of sensitive time periods like the calving and nesting seasons.”

CRDN’s news release says it has retained JFK Law to help address its concerns around uranium exploration within its territory.

The provincial government says it will continue to discuss with CRDN to “better understand” those concerns.