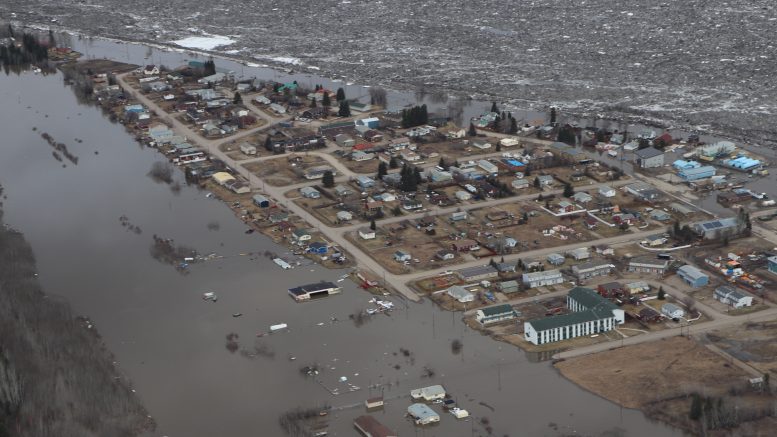 An aerial view of the flooding in Fort Simpson. (Photo by Luke Carroll/ CKLB.)

Fort Simpson Mayor Sean Whelly says seven people have told him their homes are uninhabitable, but no municipal buildings are damaged.

Power is being restored to the island area-by-area and water is expected to be back on Tuesday, although there will be a boil water advisory until at least Friday.

He says the community will now begin the process of rebuilding.

Muaz Hassan is the owner of Fort Simpson’s Unity Store.

He was one of the people displaced from his home as a result of the flooding.

This isn’t his first time experiencing flooding, but it is his first in Canada. 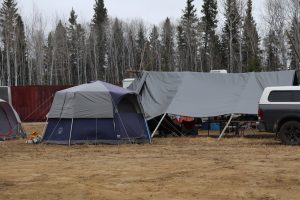 “I’ve been a refugee, I lived in a refugee camp, I’ve been evacuated…. from Somalia,” he says. “But we are in the 21st century in Canada, which is the first world, so I believe that should mean something.”

Hassan says he appreciates the support from the NWT government during the flooding, but says it needs to be more proactive.

“Usually in disasters, you have early warnings. And right now we passed the early warning situation, we have a disaster,” he says. “This is a lesson for us to plan.”

“We should be aware that it does happen, it might happen again, with this global warming… The island might be in danger. No one knows what’s going to happen next year.”

He says some ways the community can prepare is developing more facilities on the higher ground — including the health centre and long-term care home.

“We should try to find a way to involve the territorial government or even the federal government to support building these facilities here, in this area,” he says, pointing to the area around the top of the hill.

Chief Antoine agreed, building more facilities on the hill is one of the ways the community can prepare. 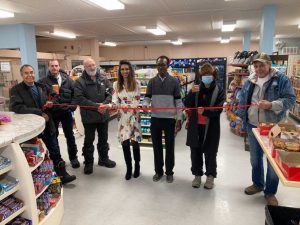 Third from the right is Mauz Hassan, a key figure in helping the community function throughout the flood. Photo taken at a ribbon cutting ceremony for Unity Story in Fort Simpson in fall 2020. (File photo/ courtesy of Celine Antoine.)

Hassan was one of approximately 100 people living in tent city during the flooding.

Not only was he a resident of the impromptu community, but one of the key figures keeping it functioning.

Denise Noel, one of the people staying in tent city, gave Hassan a shoutout for keeping the community supplied with products from his store.

Whether it was food, cigarettes or tobacco for a drum prayer, Hassan or one of his staff would drive to the store on the island and come back with the goods.

Although people are currently living in tent city, Whelly says he doesn’t expect people to be staying there longer than Friday as utilities continue to return to the island homes.

But while some residents were returning to the island for the first time in over a week, 42 people remained there throughout the flooding.

Whelly jokingly calls them “the resistance.”

“Mostly it’s all medical,” Cobb explains her reasons for staying.

She says she remained along with one of her daughters and husband — her other 10-year-old daughter stayed up on the hill. 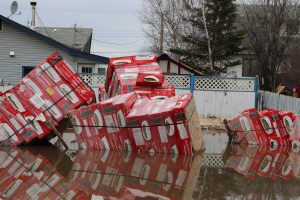 The flooding in Fort Simpson from Wednesday, May 12. (Photo by Luke Carroll/CKLB.)

Cobb says she had a backup plan incase the flooding worsened: climb atop a nearby flood-proof building, and wait for rescue.

“If everything goes bad, I know how to get into that building,” Cobb says.

Whelly says although he respected the decision to stay on the island, he hoped the residents would have left for their own safety.

“I’d like them to be where they’re safer and more comfortable,” he said last Wednesday.

He said there was some anger from those atop the hill directed at those who remained on the island, something he tried to calm.

“We’ve got to be kind to the people down there, because they’re still part of the community,” he says. “We didn’t abandon them just simply because they stayed on the island.”

Cobb says she feels resented by the rest of the community and asked that they “don’t hate her” for her decision.

“I’m just getting the feeling that everybody is saying negative things about the people that chose to stay on the island,” she says. “I had to make some hard choices.”

On Sunday water levels dipped below 10 meters after surpassing 16 meters at one point.

One person dead in excavator accident in Fort Simpson