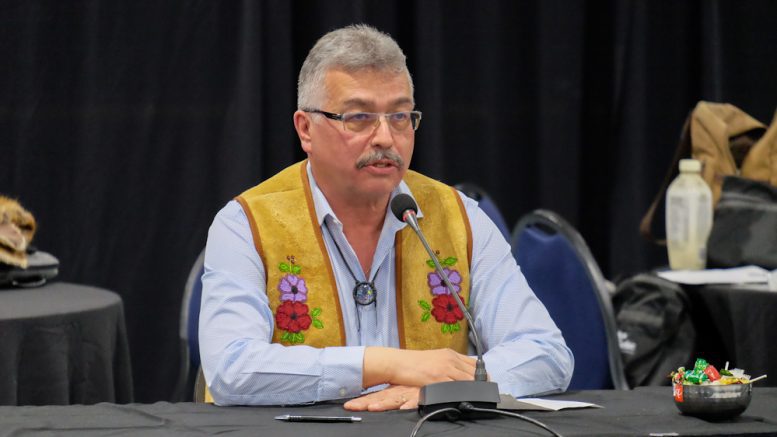 Michael McLeod, the NWT’s Member of Parliament, has some encouraging words for residents who’ve been affected by recent flooding.

“I think we’re all determined. I had really good discussions with the community leaders, and they’re saying, don’t worry, we’re going to be getting a hold of you to work with us to make it happen… I’m hearing it from all the ministers that we’re going to do everything we can to help them.”

He gave his heartfelt thanks to those who have pitched in to help flood victims.

“There’s so many people rallying around in the communities, offering support, making donations, making contributions, volunteering, there’s people in the communities that are receiving visitors who have been displaced because of the flood and government officials that are working municipal employees, elected people that are putting in long hours. We have to tip our hat to them. They’re doing a very good job. And I think it really demonstrates the well being and the good relationships communities have with each other. And I’m very, very happy to see that.”

McLeod said he has been advocating for northern residents to his federal colleagues and ministers.

“I’m speaking to a number of different ministers, including the Minister of Public Safety Bill Blair and Dan Vandal,” he said.

“We’ve raised it with all our caucus today and talked about the situation. So, our government is very much aware. There’s been meetings already that have happened between the federal government and the Government of Northwest Territories, at the official levels at this point, and there will be further engagement.

“It’s a very tragic situation. But at the same time, there’s so many people really wanting to pitch in and help, which is good to see.”

McLeod said that the GNWT is telling the federal government that the situation is under control.

“If there’s a need for assistance, we certainly would be there,” he added.

“A number of different things that could happen right now, as the way protocol dictates, the GNWT is in charge, they work with emergency measures, organization in the community, and they will monitor and work through the flood in this case, and then do an assessment of what damage has occurred and what needs to be repaired and they will put a plan of action together. And at some point, it will come to the federal government for either reimbursement or funding.”

CKLB Radio reached out to the GNWT, but did not hear back before publication.