Wade Vaneltsi is one lucky Yellowknifer to have the new KFC in his community. (Photo courtesy of Jasmine Vogt)

The wait is over.

Six years have passed since the NWT has had a taste of the colonel’s Kentucky Fried Chicken (KFC).

Dozens of hungry northerners lined up outside the KFC to be some of the first to get their hands on some finger-lickin good chicken.

Some residents even came as far as Behchokǫ̀. 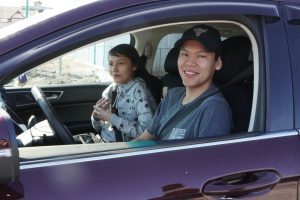 Carter Wetrade and his girlfriend, Tanisha Pierrot, travelled over an hour from their community to get their hands on some chicken. (Blayne Ly/CKLB)

Wetrade and his girlfriend, Tanisha Pierrot, travelled over an hour from their community and waited roughly another hour in line just to get their order.

Wetrade says the trip was worth it, though; he’s even prepared to do it “three times a day” if he has to.

While Wetrade and Pierrot have lunch in the city, they were responsible for picking up a few extra buckets of chicken for their families.

Some residents are lucky enough to have KFC in their own backyard.

Wade Clifford Vaneltsi is among the lucky.

“I’m holding it together pretty well,” he said, “I feel like I’m probably gonna have a good cry when I come out of here.”

Vaneltsi could barely contain himself so he went back for seconds.

Sumeet Arora is the director of operations for the KFC.

Arora says he’s been working on this project for three years.

“We’ve worked with the local communities here to make sure that we give great experiences and we have enough food available,” says Arora.

Arora says there will be no shortages of chicken.

Due to COVID-19 only 25 guests are allowed inside the restaurant at a time and must wear a mask upon entry.

The Starbucks attached to the KFC is set to open on May 7.