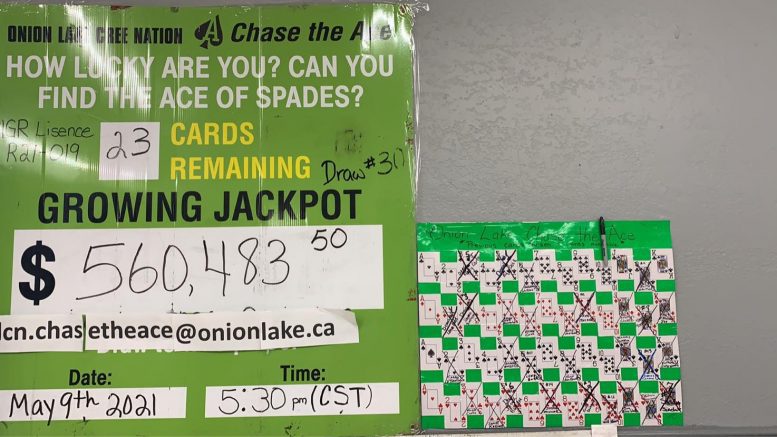 The Onion Lake Cree Nation is hosting a Chase the Ace event, fundraising for the summer PowWow. (Photo courtesy of OLCN.)

A Chase the Ace event down south has northerners excited.

The Onion Lake Cree Nation, located on the Saskatchewan-Alberta border, is hosting the event that has a jackpot of more than half a million dollars.

“It is actually very important because the proceeds go to the payment of what it is that we need to run the Onion Lake Cree Nation Powwow,” says Irene Carter, one of the organizers.

The event is being done virtually, which makes it accessible to northerners.

Chase the Ace is a lottery game typically used to raise funds for charity. Participants buy tickets to be entered into a draw, with the funds typically split three ways — a percentage to the fundraiser, the weekly winner and to the jackpot. The participants get a ticket that is drawn each week, with the winner earning a percentage of the money. The weekly winner then draws a card from a deck, and if the ace of spades is selected, they win the jackpot. If they don’t, the draw continues until the ace is found.

Donna Shears, of Yellowknife, is one of the many participants from the NWT.

“It’s just exciting and it’s for a good cause,” she says.

Shears adds the event is particularly fun as it offers her the chance to interact with people outside the territory, something that has been difficult as a result of the pandemic.

Carter isn’t surprised her event is attracting northerners, adding the pre-COVID ones used to draw people to the community from across Saskatchewan.

Anyone interested in participating must send their money by May 3 for the next draw that will be taking place on May 9.