Kyle Bayha is a heavy equipment operator at the Nechalacho Rare Earths Mine. (Photo by Luke Carroll/ CKLB.)

Kyle Bayha says the limited environmental impact of the Nechalacho project is what differentiates it from previous mines he’s worked at.

“With the no tailings in this process we got here… I’m pretty happy to be environmentally friendly,” he says.

Having worked on previous reclamation projects for other mines, he says he expects this one to be a lot easier.

Bayha, a heavy equipment operator from Délı̨nę, says he also appreciates working on an Indigenous-operated project.

“Everywhere else I’ve ever worked, I was one of the minority, I’ve always been either the only one or one of the only few,” he says.

The mine is employing around 30 seasonal workers, of which around three quarters are Indigenous, says David Connelly, vice president of corporate affairs and strategy for Cheetah Resources Corp.

The mine operations are being run by the Det’on Cho Nahanni Construction Corporation, under the economic arm of the Yellowknives Dene First Nation (YKDFN).

“Nechalacho is the first time in Canada that an Indigenous group is responsible for extracting the minerals on their own territory,” Connelly told reporters at a tour of the mine on Monday.

Cheetah Resources, owned by Vital Metals, a publicly traded company in Australia, is overseeing the mine after purchasing the upper portion of the Nechalacho project from Avalon Advanced Materials, in 2019. 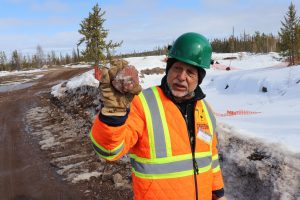 Chris Pedersen, a geologist on the project, holds up a piece of the ore that will be extracted. (Photo by Luke Carroll)

The mine is located about 100 kilometres east of Yellowknife on Thor Lake.

At the site, ore will be extracted from an open pit slightly wider than a football field.

Connelly says he expects 600,000 tonnes of ore-bearing rock will be extracted this summer, of which 100,000 tonnes will contain valuable rock known as bastnaesite REE ore. This contains between 15 to 17 rare-earth minerals which is used in a variety of technologies.

Once extracted, the mine is able to sort the material using a computerized technology that separates the waste rock from the valuable rock.

As no chemicals are being used, the waste rock will be the only cleanup from phase one.

The product will then be packaged into containers and shipped to Hay River by barge this summer.

From there, it will be transferred to Saskatoon where, in partnership with the Saskatchewan Research Council (SRC), Cheetah will establish a plant that will further refine the material.

A Norwegian company called REEtec has committed to buying all the product that will come from phase one over the next five years — a 1,000 tonnes per year of rare-earth oxide equivalent. The product will then be shipped from Saskatchewan to the facility in Norway where it will be further processed.

Connelly says it will separated into tiny pure minerals that can eventually be turned into powerful magnets that are essential for electric vehicles, computer hard drives or medical diagnostic instruments. 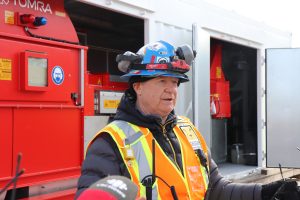 Clarence Pyke, the mine manager, speaks to reporters in front of the sensor based sorting system. (Photo by Luke Carroll/ CKLB.)

The current pit is just part phase one of the project, which is aiming to show the benefits of small scale, low-environmental impact mining operations.

Going forward, Connelly says he is fully confident there will be a phase two, which will be larger scale.

Connelly says REEtec has indicated plans to buy 5,000 tonnes of rare-earth oxide per year for the following five years and expects the second pit to be at least five times the size of the first.

Chris Pedersen is a geologist on the project who discovered the material in the area back in 1983.

Now almost 40 years since his discovery, he says it is special to see all the progress.

“It goes to show you just how long it takes from exploration and discovery to actually developing and getting something out of the ground.” 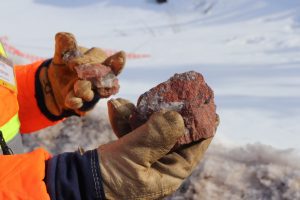 The red part of the rock is bastnaesite REE ore which contains up to 17 rare-earth minerals. (Photo by Luke Carroll/CKLB.)

This story has been updated with statistics of the hiring numbers and the amount of rare-earth oxide purchased by REEtec.